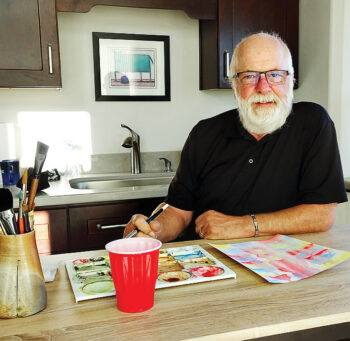 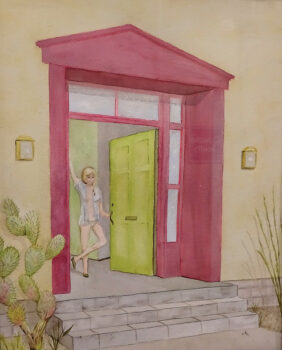 When he was in high school, Calvin Saulsbury thought he might become a technical illustrator.

“I’ve always liked detail work. I was a pretty good pencil artist. I’ve always been artistic, but never really had the time to pursue it until I retired,” he said.

Meanwhile, he poured his creative interests into music.

After retiring from the Seattle area, the Saulsburys spent a year seeing the country in an RV. During that adventure he took up coloring, filling several adult coloring books with detailed scenes using colored pencils.

“It was very relaxing and I learned a lot about shading and blending colors. It also gave me the impetus to explore art a little more,” he said.

So, when the Saulsburys bought their home in SaddleBrooke about two and a half years ago they had several requirements: space for a long-arm quilting machine, space for Calvin to create and practice music, and space for him to pursue a budding interest in painting.

“We turned the den and spare bedroom into a quilting studio for Janet and built a casita that would become space for my music and art studio,” he said.

“After we got settled here, I started taking classes through the Art Guild, but they have to work around my golf schedule,” he laughed. “I’m pretty busy between golf, music, and art. I play golf several times a week, practice music almost every day, and when I get an idea, do some painting. I start something and while it’s drying, I can play something,” adding that he’s teaching himself to play the violin these days.

Saulsbury says he likes working in watercolor because it’s a challenge to control. He admitted he likes to overcome challenges.

“I’m pretty good at coloring inside the lines. Now I’m trying to learn to be more creative. One of the instructors suggested I throw away all my small brushes. I haven’t tried that yet, but I’m working to be more flexible and trying new approaches to see what happens. I now know several things that weren’t successful,” he laughed.

“For me, starting with coloring books was a great way to see if I liked it. The Guild, and its classes, is one of the best amenities here. We have so many artists who are willing to share and help you grow and experiment,” Saulsbury said.

“I wasn’t sure I was going to enter the Guild’s contest and only after the deadline was extended because of the pandemic did I start thinking about it. I wondered, ‘What was behind that door?’” he smiled. “I actually painted two versions of my contest entry. One is a G-rated version and the second is a little more suggestive.”

Saulsbury’s painting Welcome Home, won most creative approach, beginner category in the SaddleBrooke Fine Arts Guild’s recent “One Image, No Limits” contest. Contest judge Laurie Brussels was very entertained by this painting, noting, “It’s very creative.” Viewers are likely to agree the painting definitely tells an entertaining story, one that might be suited for mature audiences.

Viewers can see Saulsbury’s and the other contest entries at the RoadRunner Gallery in SaddleBrooke One’s Clubhouse. Visit www.Saddlebrookefinearts.org for more about the Guild.