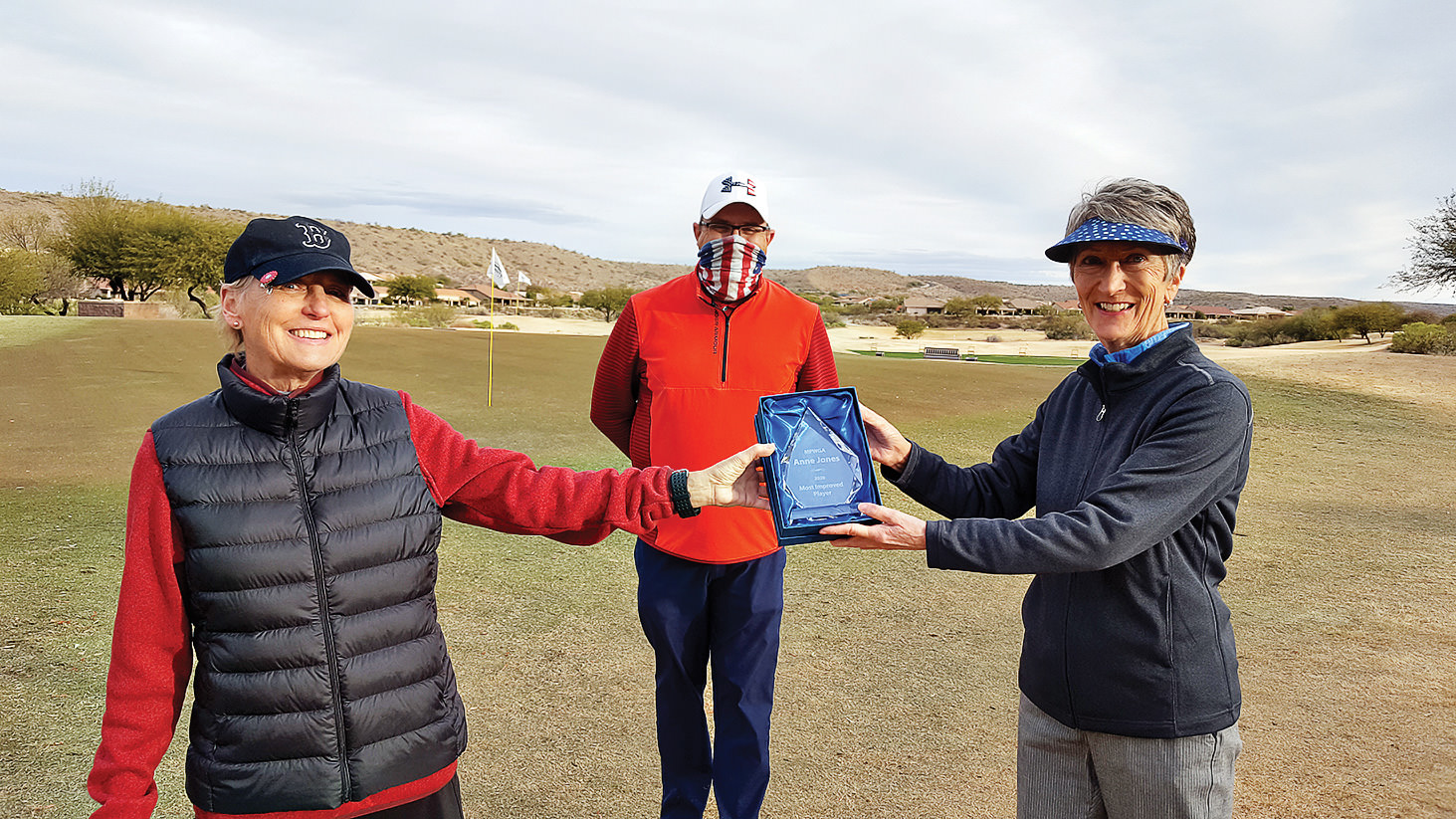 Where beautiful souls have gone before, memories live on. And so, each year the MountainView/Preserve Women’s Golf Association (MPWGA) remembers Mary Sturgeon Canfield and her daughter Nancy, by carrying on the tradition of designating the Most Improved Player (MIP) award. The award was established by Mary in tribute to Nancy, who showed how quickly goals can be achieved through dedication, discipline, and hard work. Anne Jones is the 19th MPWGA member to be honored for her achievement by having her name engraved on the Mary Canfield MIP Award trophy, displayed in the case next to the Mesquite Grill.

Anne has been golfing about 40 years. She started with her husband Dave in Michigan, in the basement of the local community center in a makeshift indoor driving range, hitting from a mat into a net. Just as she had adjusted to golfing in Michigan’s cold and snowy white winter conditions, last year Anne adjusted to the pandemic, and registered for her own SaddleBrooke senior home-schooling program on the driving range studying better golf, and watched her Handicap Index drop slightly more than four points. Feeling that her golf game had plateaued over the years, she committed the time and hard work necessary to improve, focusing on her basic swing. As her swing improved, the other parts fell into place, and her game became some kind of wonderful, making it easy to connect all 18 dots, even in the driest and second hottest season ever seen in our region. And the rest, they say, is golf history.

Anne learned of her award when it was announced Jan. 26 at the Kick-Off Zoom meeting. Later a personalized engraved crystal trophy and MIP bag tag were presented to Anne by MPWGA President Debbie McMullin and PGA Golf Pro Mike Karpe. Anne says she was totally surprised, and very happy, to have earned the MIP Award.

Anne’s ball of choice is a Callaway Supersoft. Her clubs of choice are the same old, same old set Dave had put together for her years ago, which she says still suits her perfectly. From time to time she has tried other clubs, but finds they are not as good as the ones she has. If they ain’t broke, don’t fix them, just regrip them.

Anne has been a member of the MPWGA intermittently for the 21 years she has lived in SaddleBrooke, and a full-time member for the past four years. She enjoys playing with women with a similar index and game, and the opportunity to spend time in the fresh air with friends. In line with Mary Canfield’s hope that the MIP Award will inspire recipients to take pride in their accomplishments and strive to continue to improve, Anne is looking forward to even more play with the MPWGA, continuing to improve her golf skills, and beating her best round ever at SaddleBrooke, an 80 at MountainView.