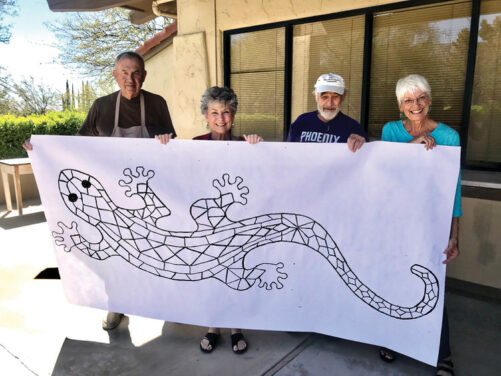 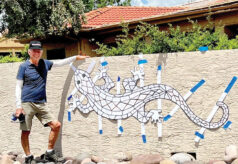 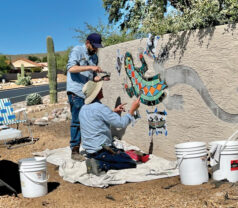 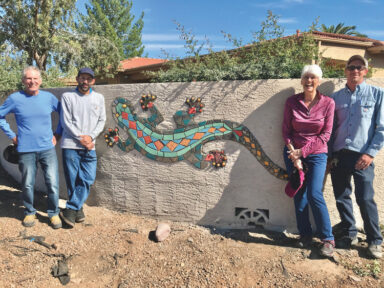 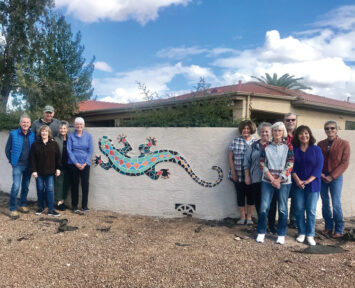 Public art is a reflection of how we see the world—the artist’s response to our time and place combined with our own sense of who we are.

It does not take much to have a vision, but having the passion for the vision—well, that is another thing.

So, consider the vision that came with The Lizzie Project. It started with a vision of creating public art within the SaddleBrooke community. The vision was initiated by Tom Atkins, Bob De Fraites, and Steve Penner, members of the SaddleBrooke Pottery Club. With that vision in mind, a brainstorming session was held with other Pottery Club members, Christine Smith, Sue Hedrick, and Becky Toland, to discuss the what, the where, and the when of this enormous project.

It was decided to create a mosaic relief on one of the walls facing Ridgeview Boulevard, and after several drives around Ridgeview, a possible site was chosen. With the encouragement of Susan Allen and Debbie Muise of the Property and Roads Committee, the idea was presented to John Reed, director of operations, and Vivian Timian, general manager. After their enthusiastic approval, The Lizzie Project was launched.

The lizard, affectionately known as “Lizzie,” would be a large, eight-foot mosaic image (a relief) that would don the wall at Idyllwind and Ridgeview.

To get the project started, Christine Smith was designated as the head of the design team and Tom Atkins as the project coordinator. The project took on a life of its own with enumerable moving parts, including:

Finding images of lizards online, then selecting one with interesting internal design;

Meeting with the Santa Teresa Tile Company for advice on how to create such a large mosaic, possible glaze colors, and cost of materials—the major cost funded by the Pottery Club and installation funded by the SaddleBrooke One Maintenance;

Meeting with the SaddleBrooke One Board for their unanimous and enthusiastic approval; and

Creating a four-foot by eight-foot Tyvec template of the lizard shape;

Sectioning and numbering tiles of the lizard, which would ultimately number 190 different shapes.

Then creating began for the 15 Pottery Club volunteers who:

Rolled clay on a large slab roller to control thickness and cut out each of the 190 different shapes;

Scored the bottom of each tile and numbered them according to the template and let them dry for two weeks;

Added 11 different color glazes to the tiles; and

Fired the color-glazed tiles again at 2,400 degrees to set the color and put them into storage until after monsoon season.

The project continued by:

Meeting with John Reed, Manny Parra, and Jeff Egon from Maintenance to plan the installation; and

If you get an opportunity, drive by Lizzie to see a labor of love!