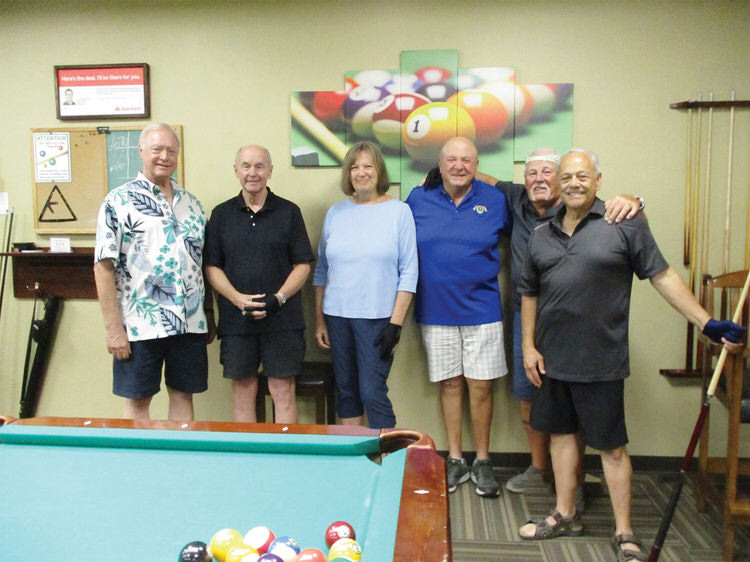 Tournament directors were Ron Ridge, with Joe Giammarino on the brackets. Great job, gentlemen! The field of players was split into two groups. Group A consisted of players who have not taken the Skills Rating and members who have taken the Skill Rating and scored 25 or less. Group B consisted of members who scored above 25 on the Skill Rating. Using a blind draw, we drew one player from the B Group and one player from the A group to make up a partner team. After the draw, the 10 teams were as follows: Dick Dunbar/Les Goins, Fred “The Baker” Dianda/Julie “Cutter” Ferguson, Dick “The Visor” Titus/Rich Adinolfi, Tony “The Snake” Cardillo/Dick “The Stick” Schroeder, Jack “Crash” Hoverter/Jack Hepner, Joe “Ball Breaker” Vidmar/Chris Deschanes, Jim “Shooter” Fabio/Paul Swane, Dominic “The Doctor” Borland/Terrence “The Cue” Sterling, Mike “Mayhem” Meredith/Steve Wiley, Phelps “Frenchfry” L’Hommedieu/Bob Fagotti.

Recap: Dick Dunbar/Les Goins’ road to victory over a field of nine other partner teams was accomplished as follows: Dick D./Les started with a bye. Then Dick D./Les defeated Tony/Dick S., next Steve/Mike, and, finally, Fred/Julie to get to the hill. Now Dick D./Les will have to be beaten twice by someone to take the title away from them. Their opponents who came through the losers’ bracket to challenge them were Dick “The Visor” Titus/Rich Adinolfi. Dick T./Rich won the first game when Les inadvertently made the 8-Ball out of sequence for the loss. This set up the final match, which would be a race to two. Dick T./Rich won the first game, but Dick D./Les came back to win the next two games to take the title! Congrats, Dick Dunbar and Les Goins, our 2022 8-Ball Scotch Doubles Champions!

The PPB wants to thank all our participants. The 8-Ball Scotch Doubles Tournament started at 12:20 p.m. and lasted three hours and 30 minutes. We competed and met some new friends who shared our passion. That is a good day! Rack’em Up!