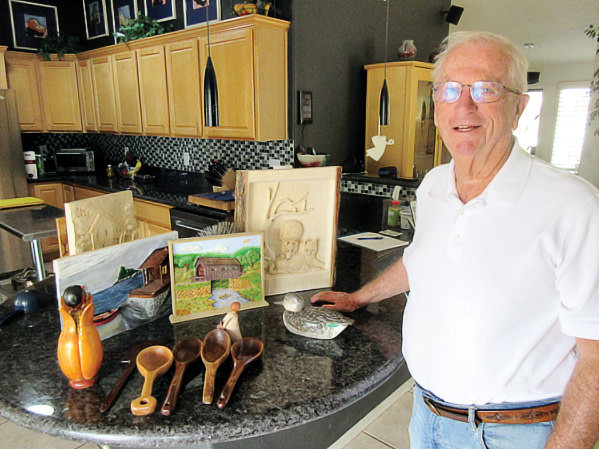 Our club has 23 active members, and all of them have carvings in the works. Their many projects include animals, birds, Kachina dolls, bowls, Christmas ornaments, scene carvings, cottonwood bark carvings, and even car models. Some of our members had never carved before joining, and some were very experienced.

I would like to introduce you to another of our members, Larry Koshak. Larry and his wife Janice purchased their home in SaddleBrooke in 1999, relocating from the Minneapolis/St. Paul area. He was an owner of a civil engineering firm that worked in water treatment. Although it was a challenging profession, he was ready for a change and found a new hobby in woodcarving.

He had never been a woodcarver, so his first projects were simple and confidence-building, starting with a computer mouse and then carving a teal duck. Both gave him assurance that this was a fun and challenging pastime. His interest in this pastime grew, and he began looking at other carving projects.

A few years ago, he began going to the Woodcarvers Rendezvous in Creede, Colo. This is a weeklong summer camp for woodcarvers. They offer carving classes, competition, vendor displays, and great interaction with other carvers. He has been there at least eight times and learned many types and techniques of carving. He has excelled at relief (three-dimensional) picture carving. They look like pictures with different depths, and they are unique pieces of art. He has won several awards for his relief carvings, and they are excellent!

So, let the wood chips fly! Now that you know of the SaddleBrooke Woodcarvers Club, we hope that you come by to meet some of our members and join us. We meet Monday afternoons from 1 to 4 p.m. and all day Tuesday from 9 a.m. to 4 p.m. in the Turquoise Room at MountainView Center. We hope to see you soon!