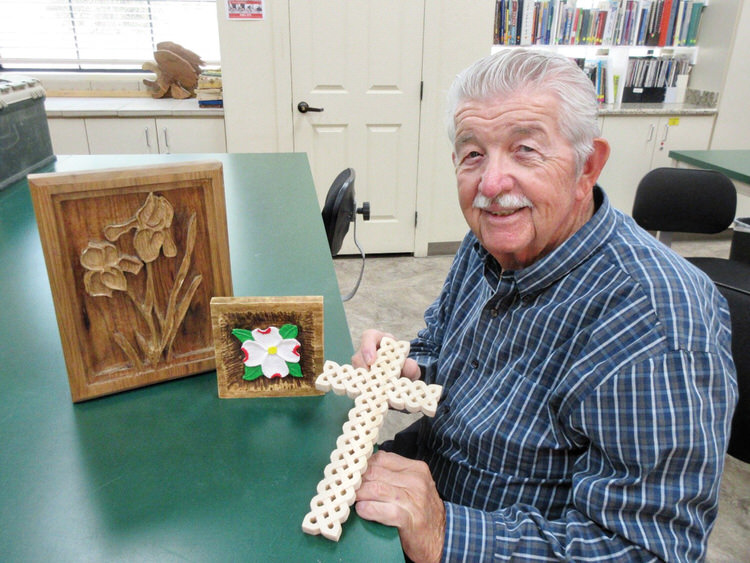 John Martin with a few of his recent carvings

How about another article about the famous woodcarving club in SaddleBrooke? Since the beginning of SaddleBrooke, there has been a woodcarving club, and it seems like the best kept secret! All it takes to get started is a piece of wood and a sharp knife.

Our club has 22 active members, and each one of us has at least one carving project in progress. Our many projects include Kachina dolls, animals, birds, bowls, Christmas ornaments, scene carvings, cottonwood bark carvings, and even car models. Our club members range from new carvers to some who have been carving for many years. For most of us, it is a relaxing and challenging pastime.

With this article, I would like to introduce you to another of our members, John Martin. John and his wife, Karen, purchased their home in SaddleBrooke in 2003 after living near Chicago for all their lives. With a son in Indianapolis and their daughter in North Carolina, they see them as much as possible. John worked in the telephone industry, starting with Illinois Bell and finishing with AT&T. After retiring, John and Karen have enjoyed overseas travel trips to many exotic places. And after all those working years and moving to SaddleBrooke, he returned to a favorite old hobby of woodcarving.

John was a woodcarver from a young age, through his years in Scouting, his many years as Scout leader, and now as a member of the SaddleBrooke Woodcarvers Club. As an Eagle Scout, John worked with many young men and instilled a great appreciation of woodcarving. Most kids never knew that they could take a piece of wood and turn it into something of their own creation. John helped many to realize a lifelong enjoyment of carving.

Since living in SaddleBrooke, John has completed many projects that include relief carving of different flowers, different signs for friends, and now a Celtic-inspired cross.

John has also donated the last three years of his time to being the treasurer of the Woodcarvers Club. His attention to detail has kept the club balanced to the penny. Thanks for a great job!

So, let the wood chips fly! Now that you know of the SaddleBrooke Woodcarvers Club, we hope that you come by to meet some of our members and join us. We meet Monday afternoon from 1 to 4 p.m. and all day Tuesday from 9 a.m. to 4 p.m. in the Turquoise Room at MountainView Center. We hope to see you soon!