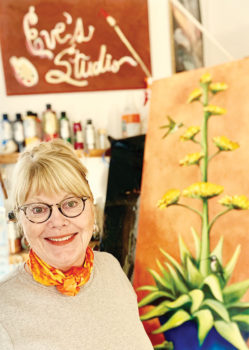 Eve and Stan Fly of Walls of Wonder will again kindly provide paintings to create the sets for Community Circle Players’ March dinner theatre production. What a wonderful contribution to the show Don’t Drink the Water, by Woody Allen presented by special arrangement with Samuel French, Inc.

SaddleBrooke residents Eve and Stan Fly have been transforming ordinary walls into works of art throughout Tucson for almost 14 years. In 2018 and 2017, they also donated their services to create the dinner theatre sets of The Mafioso Murders and Eat, Drink, and Be Deadly! Eve says, “My interest in contributing to a CCP production is contained in the name Community Circle Players; members of our community donating their time, talent and energy to create something wonderful in the SaddleBrooke community. I wanted to be a part of that.”

This year’s CCP comedy Don’t Drink the Water, which premiered on Broadway in 1966, centers around a family of tourists trapped somewhere behind the Iron Curtain in the 1960s. There are two film versions, the 1969 one directed by Woody Allen starring Jackie Gleason and a 1994 film with Michael J. Fox starring as the American ambassador’s son. More a stage comedy than CCP’s previous mystery or interactive dinner shows, SaddleBrooke’s slightly updated presentation will be “in the round” with diners enjoying a delightful meal during the production.

Performances will be March 17, 18 and 19 in SaddleBrooke One’s Vistas and March 22, 23 and 24 in SaddleBrooke TWO’s MountainView Ballroom. Raffle tickets for Eve’s landscape set paintings are sold at the beginning every performance. The raffle is held the night of the final performance.

CCP’s past performances have sold out quickly, so mark your calendars. Ticket sales begin January 30.