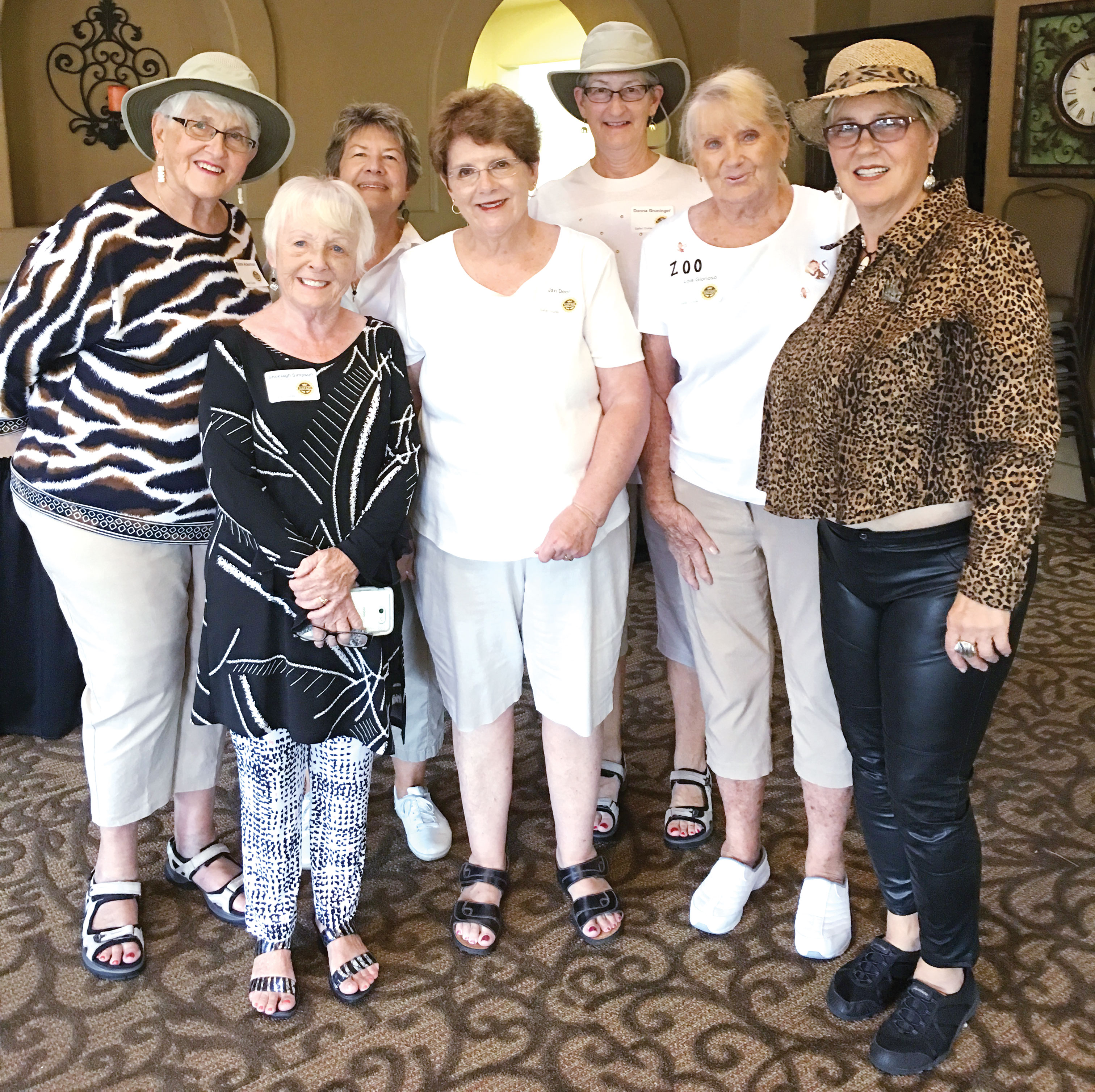 While the summer weather has certainly thinned out the ranks of the Monday morning Sputters, thank you to those loyal ladies who have shown up weekly toting their water and wearing sun hats, sun screen and cool collars. The number of Sputters on a given Monday ranged anywhere from 45 down to 22, so kudos to those ladies…cooler weather is coming!

Because of the dwindling number of putters each week due to the extreme summer heat, the Sputters’ Board decided to host a first-ever potluck lunch on Tuesday, August 21, in the Activity Center. The menu was barbequed pulled chicken breast sandwiches with the fixings and whatever appetizers, salads, sides and desserts these talented ladies wanted to contribute. The food tables needed extra support as there were so many delicious offerings. Thank you to all who contributed but especially to the Board for this great idea and for all the work involved in pulling it off.

Now that August has arrived, can the first luncheon meeting of the 2018-19 season be far behind? On Monday, September 3 the first meeting followed putting with a delicious brunch in the SaddleBrooke One Clubhouse dining room. Continuing the generosity and community spirit of the organization, the ladies were asked to bring school supplies that will be given to the Coronado School in Catalina. Another thank you goes to the Board for recognizing and acting upon the needs of students who attend this outstanding school just down Oracle Road from SaddleBrooke.

One of the annual highlights dedicated to entertaining those Sputters who do not depart for cooler climates is the Summer Fun Event. Held Sunday evening, July 29 in the RoadRunner Grill and surrounding rooms, the lower level of the Clubhouse looked like a jungle gone wild! Seven teams of four or six participated in nine safari-themed games that were difficult but definitely fun. First place winners were members of the Terrible Tusks, Deborah Gryniewicz, Hazel Roper, Barb and Ken Turner. Second place went to the Monkey Maniacs, Hilda Clyde, Virginia Dial, Carol and Vlad Langer. The remaining teams, the Horny Rhinos, the Long Necks, the Kooky Crocs, the Yipes Stripes and the Roaring Lions may not have won a prize but their members certainly enjoyed the friendship and challenge shared as they made their way through the games. Following the games an outstanding buffet dinner was served ending with “fresh-from-the-jungle” bananas foster for dessert.

A most sincere thank you to those Sputters, aka The Safari Guides, who worked long and hard putting this fun evening together: Elaine Ackerman, Sue Bartholme, Joni Campel, Jan Deer, Lois Glorioso, Donna Gruninger, Jan Haney and Sheelagh Simpson.

For anyone interested in the Verde Sputters, please contact our Membership Chair, Elaine Ackerman, at 825-8123. Membership is open to any woman living in SaddleBrooke One or SaddleBrooke TWO who does not belong to a sanctioned golf league.