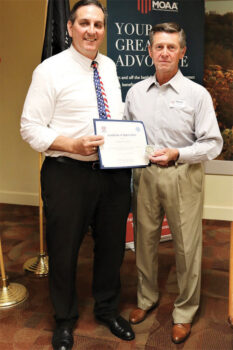 The Catalina Mountain Satellite Chapter (CMSC) of the Military Officers Association of America (MOAA) held its April meeting on Saturday, April 17. The meeting began with a business session presided over by Col. Bill Nagy, president.

Also attending the meeting was special guest Col. William A. Wojciechowski, USAF (Retired). Col. Wojciechowski is the president of CMSC’s parent Tucson MOAA Chapter. He discussed the activities of Tucson MOAA, particularly its charitable support of Esperanza en Escalante. This charity provides housing to homeless veterans and their families.

The presentation subject for the day was Old Glory, the flag of the United States of America. The presenter was Douglas Harpold, who is the managing funeral director of the Vistoso Funeral Home. Doug is an ardent supporter of the local American Legion Post, as well as the Catalina Mountains Elks Lodge No. 2815.

Doug brought his collection of full- sized historic flags and discussed each flag’s importance to our country’s history. This discussion included the Pine Tree Flag, which was carried into the battle of Bunker Hill and the Betsy Ross Flag, which featured a five-point star instead of a six-point star. He noted that a 13 stripe, 48 star flag was in use from 1912 to the beginning of the Vietnam War in the 1950s. Our current 13 stripe, 50 star flag came into use on July 4, 1960.

The CMSC will not meet again until Oct. 16, 2021. The location and time of the next meeting will be published at a later date. The Catalina Mountains Satellite Chapter is part of the Tucson Chapter of MOAA and encompasses Northwest Tucson including Catalina, Oracle, parts of Oro Valley and Marana, SaddleBrooke, SaddleBrooke Ranch, and Sun City. For additional MOAA information, contact Col. Bill Nagy at [email protected] or visit our website at www.tucsonmoaa.com. MOAA is a non-profit veteran’s association dedicated to maintaining a strong national defense and preserving the earned entitlements of members of the uniformed services and their families and survivors