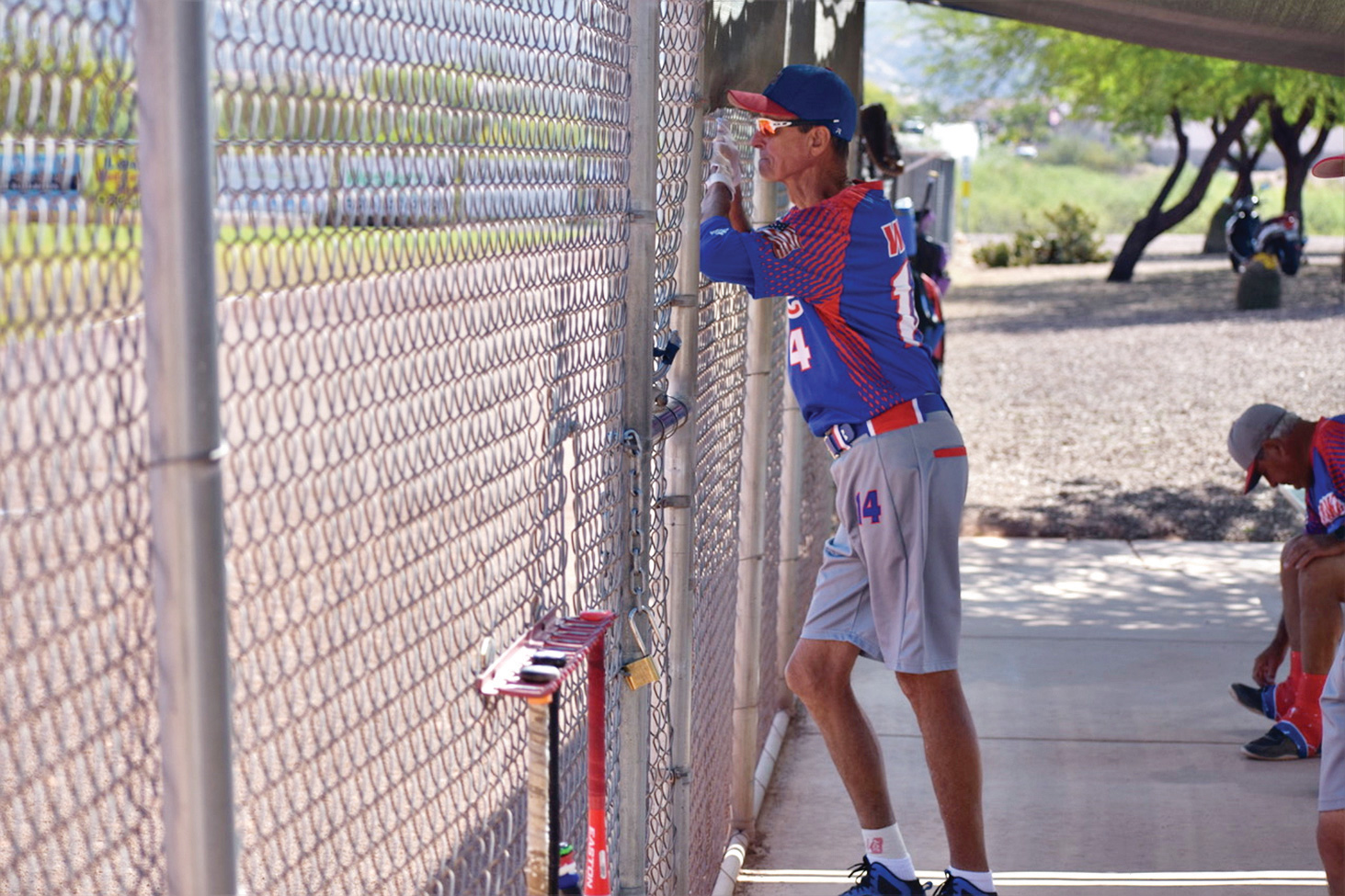 Tim Ward is full of positive energy as he manages his SaddleBrooke senior softball team in their final game of the winter season last month.

He shouts advice and encouragement from his outfield position, the third-base coaching box, and the dugout.

“Hit that Longo sign in right center field,” he says to one of the team’s sluggers. “Good swing, Joe,” after a solid hit to the outfield by his second baseman. “No time like the present,” he reminds the team after they fall behind by a few runs late in the game.

Ward is one of 21 men and women who managed the 26 teams (a few managed more than one team) in the 15-week winter softball season at SaddleBrooke. They do so because they love the game and somebody has to do it.

Before the start of the season, managers work with league commissioners to agree on team rosters. On game day, the two managers work together to ensure the proper equipment is on the field and in the dugouts, the infield is dragged, and the American flag is raised.

The most critical job of the manager is filling out the lineup card—who bats when, where they play in the field, and selecting courtesy runners—and that can be tricky. As one manager put it, “The hardest part is trying to please everyone.” It also helps to be part cheerleader.

Ward manages in the most competitive league. He puts players where he feels they can be most effective, even if they are not always in their preferred positions. They usually understand.

“It’s difficult to get everyone the time they want in the positions they like sometimes,” he says.

He considers it a job well done if his team is competitive and enjoys the season. “That’s why we play,” he says.

Ward’s advice to first-time managers? “Enjoy the process. Remember, your job is to make lineups and put a defense together. The guys will do the rest. I look at it as being more of a coordinator than actually being a manager.”

Harold Weinenger says managers need to know the players, their skills, personalities, and preferences in terms of positions and place in the batting order.

“Not every player will be best suited to play the position of their dreams, but you try to accommodate them the best you can. Having a positive, encouraging attitude is important, especially when the team is not winning,” he says.

Similar to Ward, Weinenger says a manager has a successful season if the team feels they enjoyed themselves and played some good ball, regardless of their final record.

Tony Lulek recently had knee replacement surgery and was unable to play this season, but he enjoys the camaraderie of his fellow ballplayers, so he decided to manage two teams.

The hardest part for him is juggling the defense. Not many players like to sit on the bench or catch the whole game, so he tries to share those responsibilities. He appreciates the willingness of some players to “play wherever the team needs me.” Those teammates are a manager’s best friend, he says.

When the entire roster feels like they’ve had fun and their participation was valued, Lulek considers it a winning season.

“Sure, most of us still have that competitive streak but at the end of the day, we all collect the same paycheck, win or lose,” he says.

Long-time skipper Ed Cussick thinks having a thick skin, sense of humor, patience, and ability to put things in perspective are important traits for a manager.

“We are all generally ex-jocks and like to win, but our memories are often much better than our skills,” he says. “Perform your best but don’t take it too seriously as a player or manager. Stay even-keeled, give kudos where appropriate and be gracious in winning and losing.”

If you are interested in learning more about SaddleBrooke softball, visit saddlebrookesoftball.com. The eight-week winter season started May 3 with games Monday through Friday in five leagues based on skill level.