The annual Cinco de Mayo fiesta in Unit 17 was another smashing hit! Nearly 70 neighbors attended the event at the home of Robyn Gearhart and Scott Brewbaker. This culinary feast featured an abundance of traditional Mexican appetizers, entrees, and desserts prepared by the attendees. What a special fiesta for Mexican food aficionados! The highlight of the evening was spending time together as we watched the sunset over Catalina One.

Next month’s event is a salad and dessert dinner at the home of Faith Fromson on Saturday, June 12. Unit 17 enjoys this annual gathering at Faith’s each June. 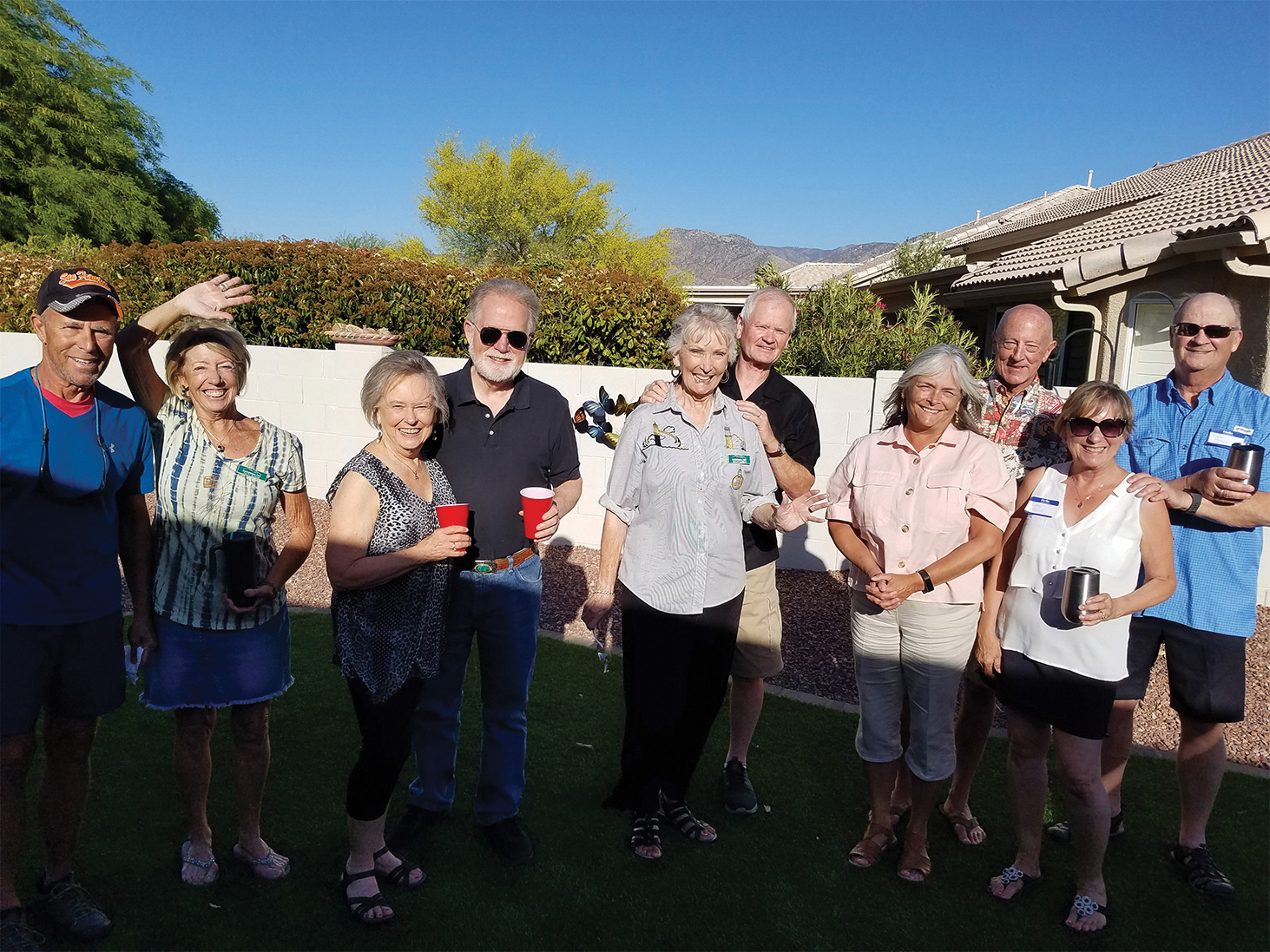 On May 2, Unit 24 celebrated their first unit party in 14 months. Jerry and Elizabeth Getlan and Buster, their Schnauzer, were our hosts.

The sun was shining, and the wind calmed down to a cooling breeze just in time for the festivities to begin. We began by welcoming several of our new neighbors, whom we had not had an opportunity to meet because of the shutdown. Of course, we were all curious to hear where they moved from and what brought them to SaddleBrooke. We also said farewell and bid safe travels to those snowbirds who were leaving for the summer.

There was never a shortage of conversation since we all had lots to talk about and news to catch up on.

As always with our unit, there was lots of delicious food and drink. We had a decorated cake, sandwiches, meatballs, Roberta’s now famous baked beans, and lots more that filled the serving tables.

We are all looking forward to continuing our regular unit events! 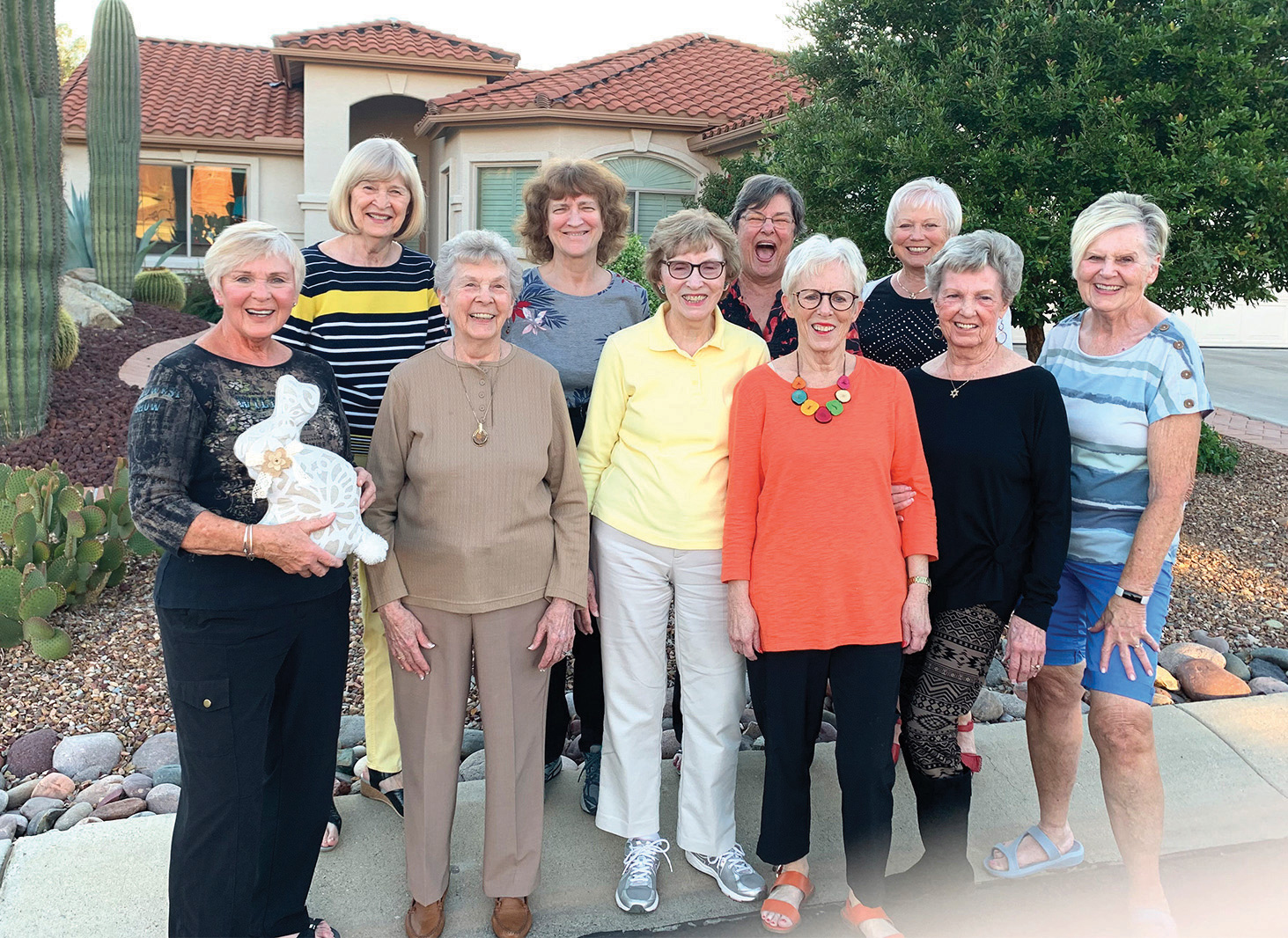 The Unit 27 ladies’ canasta group with their “bunnie” mascot. (Photo by Janie Grinstead)

“Fearless Fira” Stout organized a Dine Around on May 18 at Risky Business restaurant. It was made quite clear that our residents were restless and raring to become social again when 39 people attended! In fact, Unit 27 took over the restaurant that night. One attendee summed up the event very succinctly, “The food was excellent, the wait staff was friendly and efficient, and it was a really good time!”

This was the last Dine Around until the fall, and Fira made sure that the unit residents were left with good memories until then. Thanks again, Fira.

Although the Dine Arounds are taking a hiatus during the summer, the monthly Snack and Chats will start up again in July. Eileen and Jeff Depka have volunteered to host the first Snack and Chat on Saturday, July 24. These are the events where unit residents bring an appetizer to share, plus their own drinks. Stay tuned for more information.

Another Unit 27 tradition will be revived this year. The annual unit holiday party has been scheduled for Thursday, Dec. 9 at the MountainView Ballroom. More details will be available as the time gets closer, but save the date!

The ladies’ canasta group wanted all the unit ladies to know that they are alive and well and playing regularly. Unit 27 ladies who play canasta are welcome to contact group coordinator Bunnie Gill. Bunnie had to miss a recent get-together, so the group had their picture taken with a stuffed “bunnie,” which they gave to their leader to thank her for her leadership.

Enjoy the summer and stay hydrated! 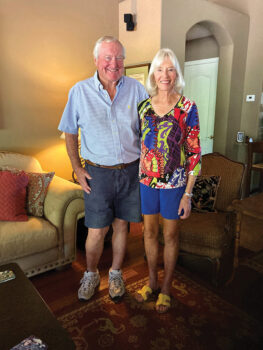 In addition to the monthly update of Unit 27 activities, we will be highlighting some of our newer residents. Many newcomers have moved to our neighborhood during the pandemic shut down, and they have not had a chance to meet their fellow residents. This month, we feature Randi and Tod Roberts, who moved to SaddleBrooke in March 2020.

Randi and Tod, who will celebrate their 58th wedding anniversary this year, met on a blind date to a drive-in movie. Now, that’s vintage! Tod was a Southern California boy, living in Pacific Palisades, and Randi’s family had moved to Southern California from Connecticut. Tod worked in the aerospace industry, and his work took the couple around the country. Upon his retirement, they rented a VW van in Rotterdam and traveled around Europe for six months.

Unlike some retirees, Randi and Tod chose to remain active. They moved to Pebble Beach, where they purchased fixer-uppers and remodeled them for resale. Although the area has a glamorous reputation, there were apparently plenty of potential houses to keep them busy.

After Pebble Beach, they moved to Indian Wells, Calif. and then to Las Cruces, N.M., to be near their grandson. It was from Las Cruces that they decided to downsize and move to SaddleBrooke.

After the moving boxes were unpacked and things put away, Randi started playing golf, pickleball, and tennis. After a couple of surgeries, Tod is now healthy and playing golf. In a nod to the past, the couple is also embarking on projects around the house and planting flowers in their beautiful backyard.

Welcome to SaddleBrooke and Unit 27, Randi and Tod!