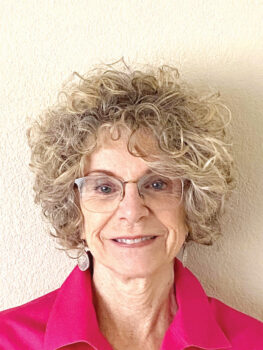 Many people in SaddleBrooke are making a difference by volunteering for a myriad of wonderful causes. Nancy McCluskey-Moore is just one of these individuals.

For those who know Nancy, it comes as no surprise that she is very well-suited for volunteerism and public service. Her educational and career history underscores her stellar background for leadership.

Nancy and her sister Libby were raised in Columbia, Mo. Their father managed a shoe and clothing store and always held two jobs, also making commercial art at night. Nancy spent many hours in her dad’s art studio, which was located in the McCluskey home.

Nancy graduated from the University of Missouri in Columbia and achieved a bachelor’s degree in English and education. Four generations of her family have graduated from that university. She taught for two years before heading out to Arizona State University, where she obtained two master’s degrees, one in media production and another in instructional systems designs.

Post-graduation, she accepted a position with Logicon, located in San Diego, where she worked with engineers and programmers to design simulators for the U.S. Navy and the Federal Aviation Administration (FAA). She was then employed by the National Technology Institute for the Deaf (NTID), where she designed educational programs for hearing-impaired students. She also helped write a how-to book for employers of the hearing impaired. While working at NTID, she learned American Sign Language. Logicon then recruited her back.

While working at Logicon, for the second time, she obtained her certification in marketing communication and public relations at the University of California San Diego, areas of study that would significantly contribute to her future endeavors in volunteerism.

Her career path changed when she started working for Puritan Bennett in Carlsbad, Calif., a medical device company where she held the position of director of marketing communications and PR. She started an employee volunteer program there, which engaged in many local service programs, including working closely with Esperanza, the Mexican equivalent of Habitat for Humanity in the United States. Puritan Bennett employees raised the funds and provided the labor on weekends to construct two houses in Tijuana. Nancy also chaired the San Diego Walkathon for MS and served on the United Way advisory board. Many jobs and years later, she would be the development director for the Ronald McDonald House of San Francisco.

Since moving to SaddleBrooke, Nancy has immersed herself in many volunteer activities. She was vice president of the Friends of the SaddleBrooke Libraries (FSL) and now manages the FSL website and emails to members. She is on the events committee for her unit, buys shoes and clothing for Kids’ Closet, is the director of communications for SaddleBrooke Community Outreach (SBCO), and has assisted with Oracle School Foundation fundraisers. She also chaired the American Heart Association Go Red for Women campaign in Tucson.

She has been married to her husband, George, for 29 years and has a son who will soon be working as a pediatric cardiac anesthesiologist at Children’s Hospital of British Columbia in Vancouver.

Along the way, while working in her various career positions, Nancy managed to obtain her degree in interior design. Her interests include reading, interior design, appreciating and creating art, as well as preparing meals from the New York Times.

The question as to whether or not Nancy sleeps is probably on everyone’s mind. But, yes, she does find time to sleep.