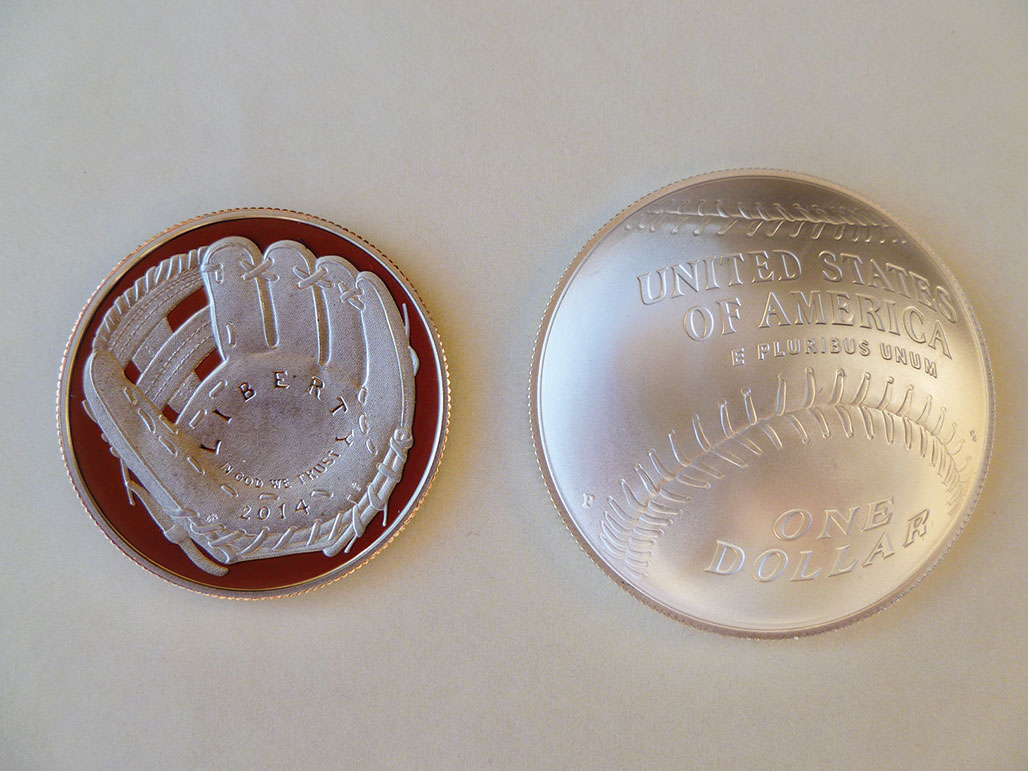 Over the years many sports have been depicted on coins and medals. Specific to baseball, the U.S. Mint issued a silver dollar for the 1992 Olympics in Barcelona, Spain. This coin commemorated these Olympic Games as baseball became an official medal sport. Again in 1997 the mint issued a silver dollar and a $5 dollar gold coin picturing Jackie Robinson celebrating the 50th anniversary of integration in Major League Baseball. Now in 2014, the U.S. Congress has really hit a home run by approving a ten year commemorative series of coins celebrating our national pastime, baseball.

The first coins in the Baseball Hall of Fame Commemorative Coin Program, dated 2014, are very unique as they are domed or curved to better symbolize the sport of baseball. The obverse is convex resembling the shape of a baseball while the reverse is concave depicting the inside of a baseball glove. The coins issued were a clad (copper-nickel) half dollar, a silver dollar (90% silver) and a $5 gold coin. These are the first curved coins the U.S. Mint has issued and they have turned out to be one of the hottest modern coins of the year with both coin collectors and baseball fans. These coins were a production challenge to the Mint and the die makers, as they had to be made in three different sizes using three different metals.

Mint sales were brisk and the $5 gold coin (mintage ~50,000) sold out in five hours and the silver coins (mintage ~400,000) sold out in a few days. Immediately after the coins sold out, collector demand for these unique coins quickly pushed the market values. The gold coin had an initial issue price of $425 and rapidly rose to over $1000 plus. The silver dollars were issued at $48 and a short time later were selling for $150 plus. As with other popular commemorative coins, after the initial spike in market value, the coin prices fluctuated based on demand and the values typically come down. Dealers are now selling the $5 gold coin for $750, the silver dollar for $60 and the half dollar for $28.

I anticipate that the demand for the baseball coins, by both numismatists and baseball fans, over the long term will drive their value up. The Baseball Hall of Fame series of coins could be an excellent investment opportunity and a great gift for the grandchildren. I look forward to future issues in this series.

If you are interested in coins you are welcome to come to the SaddleBrooke Coin Club meetings. Our meetings are held the second Thursday of each month from 7:00 to 9:00 p.m. in the Sonoran Room in the MountainView Clubhouse. February 12, 2015 is our next meeting and there will be Baseball Hall of Fame coins on display. For more information contact Ken at [email protected] or 520-825-1709.