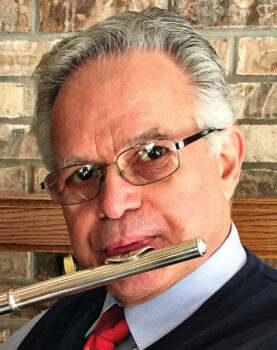 Tucson Flute Club will celebrate their 50th anniversary throughout 2020. The first public event, a gala concert, will be on Sunday, March 8th at 2 p.m. in the sanctuary at St. Philip’s Episcopal Church. Titled “Celebrating 50 Years with 50 Flutes,” the flute orchestra will include not only Tucsonans, but also former members who are traveling from both coasts and points in between to participate.

Our special guest will be Ricky Lombardo, who will conduct an all-Lombardo program, including the world premiere of “Southwestern Sketches,” which he composed in honor of the occasion. Ricky is well known in the flute world as a composer of flute choir music, as well as a flutist, educator, arranger, and publisher.

A reception will follow the concert. The public is warmly invited. Admission is free, with donations accepted.

St. Philip’s Episcopal Church is located at the northeast corner of Campbell Ave. and River Rd. There is ample parking under the solar parking structure on the east side of the campus, as well as in the north parking lot.

Tucson Flute Club was founded in 1970 by the late Philip Swanson, then professor of flute at UA. The membership includes both amateur and professional flutists, as well as those interested in the flute, including five of the original founding members. The objectives of this 501(c)(3) organization are to enable flutists to meet for ensemble playing for their own enjoyment; to broaden the knowledge of flute literature by providing performing opportunities for members and guest artists; and to increase knowledge of the flute through lectures, discussions and related activities. Among many other activities, Tucson Flute Club has sponsored solo, ensemble, and composition competitions; brought internationally known flutists to Tucson for workshops and recitals; collaborated with flute studios at UA, Pima Community College, NAU, and ASU, as well as the Phoenix Flute Society; held clinics for local junior high and high school students; performed at shopping malls, city events, nursing homes, and senior living communities; and sponsored fundraisers such as “Will Play For Food,” benefiting the Community Food Bank. Tucson Flute Club is supported in part by a grant from The Arts Foundation for Tucson and Southern Arizona. For more information see tucsonfluteclub.org.