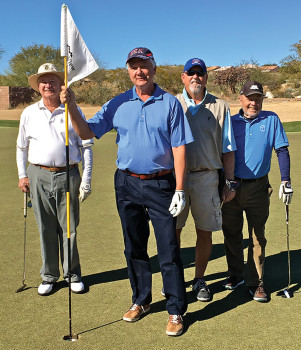 On January 14, the eighth hole at the MountainView Golf Course yielded another hole-in-one and the winner this time is Dan Nordhill. First of all, congratulations for getting your first hole-in-one and for doing same while playing in a regular Thursday M-PMGA event for, as you know, free beer will flow at the next monthly luncheon in your honor. I am sure all members will enjoy the treat.

Dan, an active golfer for over 45 years, was playing Thursday with Art Walsh, Bob Stiens and Mark Hojnacki and he guessed that among the four there were over 200 years of golf experience and he knew that he was the only one yet to record an ace. Dan’s best guess was that he had a shot of about 130 yards as he stood on the tee box. He had no doubt that his pitching wedge was the right club for the shot because he was playing with a high octane Titleist ProV golf ball left for him by his brother in law after a recent visit. The stage was set and while waiting for his turn to play he engaged in a bit of friendly banter with his cart partner who it seems narrowly missed a hole-in-one on the same hole several weeks before when his ball lipped out of the cup. All Dan could see was the image of his ball going in the hole as he addressed the ball and made his swing. The rest is history and as Dan acknowledged, the memory of the horrible double bogey he had on the prior hole was quickly erased. Congratulations again!