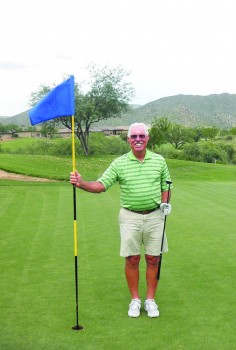 On Monday, August 31 Tim Benjamin scored the first hole-in-one of his career on the eleventh hole at the Preserve Golf Club. As we all know this hole is intimidating from start to finish. So Tim, recording your first on this hole has to be an extra special accomplishment. Congratulations once again!

Tim was playing with his neighbor and good friend Bruce Bradford. As they approached the teeing area for the Platinum Tees the group in front of them waved them through. All they could see was the top of a blue flag in the back left corner of the green. Tim’s GPS said that the back edge of the green was 130 yards away so he guessed his distance to the pin was a bit less, maybe 125 yards. His club of choice for the shot was his Adams six iron. As his ball took off he wondered if it would carry the trap on the right side of the green. It did. Now he is watching his ball slide down the hill and onto the green. It is now that the back pin location comes into play and he loses sight of the ball. Back in the cart and heading for the green Tim and Bruce think they hear the group in front of them yell something about the hole. When they get to the hole they are told that the ball was, in fact, in the hole. What a story and, if this is not enough, Tim also recorded his best ever score this day—82. Double wow!

Tim’s golf history started while in high school but really did not gain momentum until he and his wife took up the game when the kids went away to college around 1995. Both worked on their games for the next fifteen years in California and Washington before they finally settled in SaddleBrooke in 2010. By the way, The Bistro was quite pleased that Tim called several buddies and invited them to a celebration after the round was complete. We are waiting for number two!