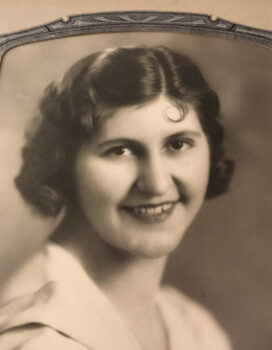 In 1985, a little-known film was released by the name of The Trip to Bountiful, starring Geraldine Page and John Heard. It is a fictional story of an elderly woman who lived for 15 years with her son and his crabby wife in a cramped apartment where the bickering is plentiful and their means of living is minimal. It is the dream of Mama (Geraldine) to return to her family farm before she dies. She begs her son and daughter-in-law to take her there. They, of course, have no time to accommodate Mama, who chatters, absent-mindedly, about the past. Seeing no buy-in from her son or daughter-in-law, Mama “escapes,” and, through a series of help from strangers, eventually finds her way back to her roots. It is a touching movie about remembering the past and realizing that one cannot always return to it. Violet’s story is almost the antithesis of the protagonist in the movie.

Violet and her husband Brook were our neighbors when I was growing up in Maumee, Ohio, a suburb of Toledo. They had one child, Ophelia, who is still my best friend, after 66 years.

I became very close to Violet, who was Mormon. Violet was a most wonderful and talented person: she painted, did cake decorating, she did photography and she grew beautiful flowers. Violet’s maiden name is Montague; she traced her genealogy (something that every Mormon is asked to do) back to the 15th century! She also volunteered her time in the Church of Jesus Christ of Latter-Day Saints genealogy library.

In 1990 we were discussing her family’s farm, which was located in Hamilton, Ohio. Violet would frequently talk about her life on the farm. I asked her if she would want me to drive her to Hamilton, which is about three hours from Toledo. She was thrilled.

So, we embarked on Violet’s very own Trip to Bountiful to visit various friends from her past, as well as to see the farm.

After we exited the interstate, we drove through bucolic, rolling hills with pencil-straight rows of summer produce; I could understand how Violet was motivated to become an artist, as the colors of that part of Ohio are breath-taking.

That day we visited several people, some of whom Violet had not seen in decades; I was happy to see Violet reminisce with her friends. But the Montague farm? It was no longer there—modernity took over and multi-thousand-dollar homes were scattered over the countryside where her family’s farm once stood. She said to me, “If my parents could see this now.”

It was a poignant time when hugs were given and goodbyes were said and I knew that there would never be a return trip for Violet, then 85 at the time.

Violet passed at the age of 96; I will always be grateful for the time I spent with such a lovely woman.