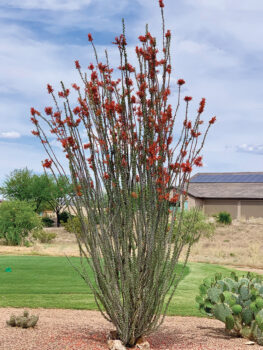 If you ventured from your shelter in place into Oro Valley or Tucson last spring, you might have seen a glorious array of flowering ocotillo in the medians of nearly every street you traveled. The slim, un-branched gray spires are covered in thorns and close green leaves and topped with tubular clusters of bright red and orange flowers.

More than once in the past few months, I have seen neighbors dutifully watering what might be ocotillo (Fouquieria splendens), although the spindly spires appear to be little more than thorny, dry sticks. To be honest, I have tried it myself since the two ocotillo my landscaper planted for me last October have yet to turn green, let alone flower. I have had more than one curious passerby ask if the plant was dead.

I first glimpsed the twisting, flowering spires in the blazing Arizona desert in the spring many years ago. They rose from the dirt in regal splendor without a hint of water or fertile soil, making them perfect drought-tolerant plants for my new desert garden.

So why then have so many of these plants in SaddleBrooke Ranch failed to green and bloom in our community?

Many of the ocotillo in my neighborhood are newly planted and need time to re-establish their root systems. It can take up to two years for a transplant to stabilize itself well enough to begin putting out leaves. That, combined with a lack of water in late winter and early spring, can cause them to produce few to no flowers. They also have a reputation for needing fairly harsh conditions to thrive, rejecting excess fertilizer and rich soil. The hardy plants actually survive on rainfall alone and flourish in the summer heat. I’ve seen living fences made of cast-off spires that were placed in the ground and in time began to bloom again.

Ocotillo are neither cacti nor succulents, but are considered deciduous shrubs or trees. Native to the Sonoran desert, northwest Mexico, California, and east Texas, they store moisture following a rainfall and conserve it by leafing out briefly, then return to their deciduous state until another storm brings more rain.

While the spires of the ocotillo can grow to 20 feet in height, an urge to prune the tips will only prevent the flowers from blooming in spring. Since the plant is a hummingbird attractor, the flowers are instrumental in bringing bird life to your garden. Bees are also attracted to the ocotillo flower and are the main pollinators of the species. Pruning can result in spindly, tangled growth and detract from the sculptural shape of the plant, as well.

Unlike most of us who now live in the Sonoran desert, native plants have lived in this climate for centuries, evolving and adapting to a lack of water, extreme heat, and occasional monsoon winds and rain. Like the ocotillo, we need to practice patience and, in time, will be rewarded for many years with the desert plants’ ability to thrive and dazzle despite the conditions in which they live.

I will be writing this column monthly and welcome your comments, questions, and suggestions. Please contact Sheilah Britton at [email protected]

To connect with Master Gardeners for information or plant-calls, contact Don Lawson at [email protected] or 425-971-3416.