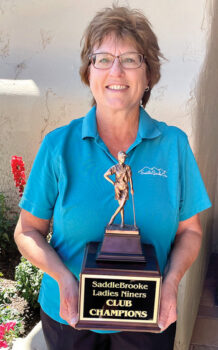 The SaddleBrooke Lady Niners’ Club Championship is a three-day competition played over a period of two weeks. The winner is the player with the lowest gross score total for the three days of play. What an exciting competition it was, for we didn’t know until the last stroke who would be the winner. Congratulations to Theresa Mares for becoming our 2022 Club Champion.

The first game of the Club Championship was held on March 8, with 16 ladies competing for the prize. The leader after the first game was Patti Rubel, with LeAnn Ellingson in second place, and Mary Leversee in third place. The competition was off to a good start. Then, two days later, on March 10, the ladies played again. After the second game, those in the lead changed. Now, Shirley Wilkins was in the lead, with Theresa Mares in second place, and Mary Leversee still in third place. This competition was getting exciting. It felt like watching the pro golfers and wondering who would land on top.

The last game of the tournament was on March 15, just before St. Patrick’s Day, so the players were hoping to have the luck of the Irish. Excellent playing continued and ended with Shirley Wilkins and Theresa Mares tied for first place. Wow, a tie—that meant a sudden-death playoff. The excitement continued for two more holes when Theresa sunk the putt that resulted in her win. She showed us all how to perform well under pressure.

In addition to the competition for Club Champion, there was another competition. Two winners in each flight were awarded prize money based on the total of the three-days Stableford points. This scoring method awards points based on how well the golfers play each individual hole. The better a hole is played, the more points the golfer gets for that hole. The highest point total wins. Prizes were awarded based on net score. Congratulations to Cheryl Hays for winning the Stableford competition by a landslide with her score of 65. Shirley Wilkins was in second place with a 58, and Yolanda Nieman was in third place with a 54.

Our many winners and prizes characterize the nature of the SaddleBrooke Lady Niners. We are known for our spirit of respect and camaraderie. We strive to make league day fun, so everyone enjoys this wonderful game of golf. Whether you like a challenging game of competitive golf or only to play for fun, SaddleBrooke Lady Niners may be just the golf club for you. Our league plays a 9-hole golf game each Tuesday morning throughout the year. Check us out at www.sb9ers.org. New membership applications are available outside the SaddleBrooke Pro Shop in the Posting Room. We are supported by our wonderful sponsors: Coyote Golf Cars, Desert Life Pharmacy, Golf Cars of Arizona, Morris Hall PLLC, and RidgeView Physical Therapy.