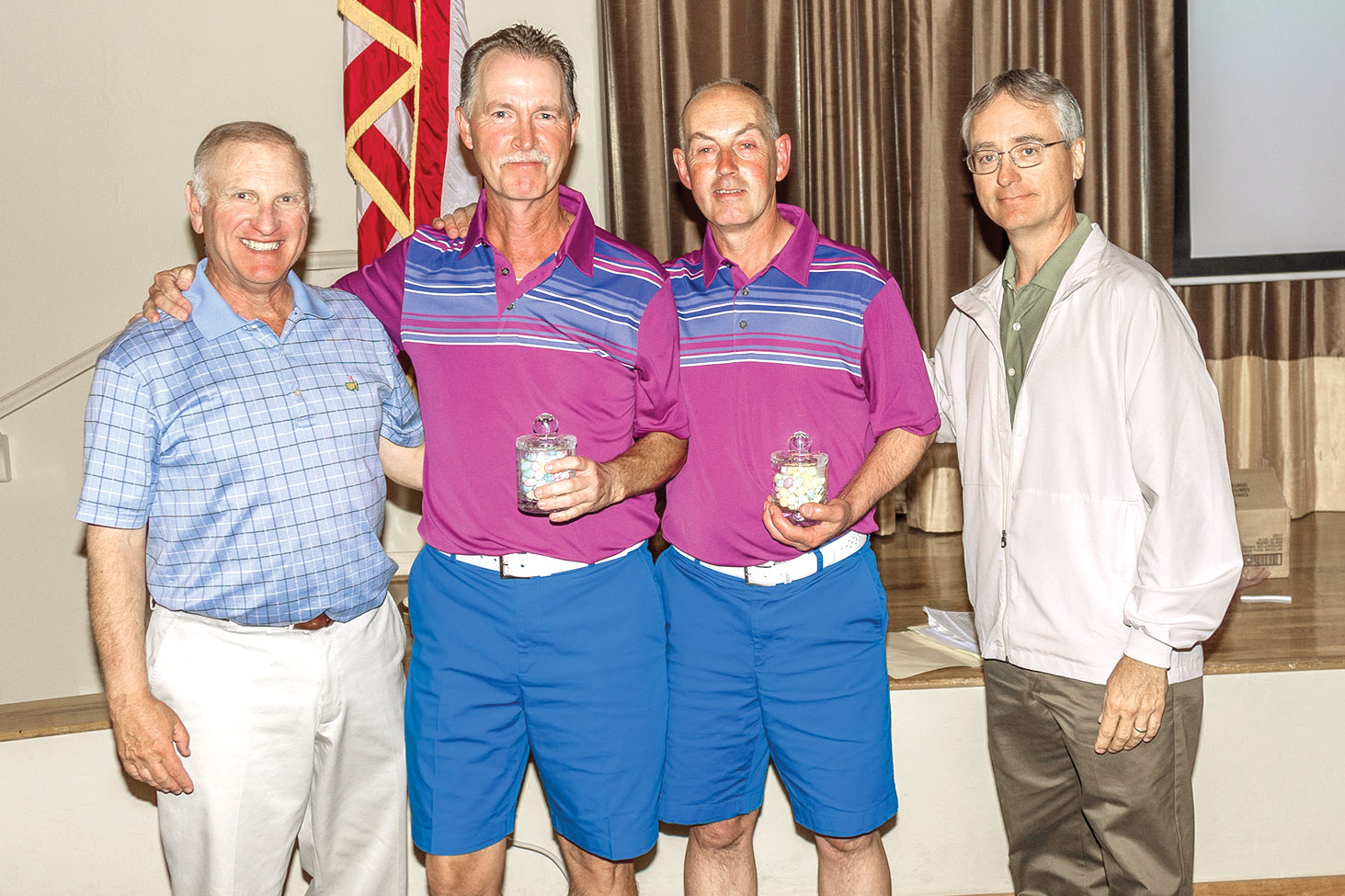 This year’s four day event began Wednesday afternoon, April 15 with check-in and a general welcome to all guests and participants. There was little time for idle chatter during check-in as the first competition of the tournament, a team putting and chipping contest, was about to get started and all were eager to perform. The lowest combined team score in the two events determined both the flight winners and the overall winner. John Stevenson and his guest Bob Johnson were the best of the best with a combined score of 12 feet 2 inches. The first day ended with awards, a delicious BBQ and, of course, adult beverages and a much more formal welcome.

Thirty three two-man teams competing in four flights battled each day for prize money at SaddleBrooke Ranch, The Preserve and MountainView. Each day the game changed. Day one was a two-man Shamble, day two a two-man Stableford and day three a two-man net best ball. A buffet luncheon followed each day’s event where winners for the day received their rewards. Friday was an especially busy day. After lunch the entire field played in a flighted Shoot-Out, an alternate shot game. The last team standing and Shoot-Out winners were Don Erickson and Jarrod Thayer. Also on Friday all spouses and their guests were treated to lunch and a cooking demonstration at the Bistro. The reviews were fabulous.

Now for the good stuff—prize money was awarded to the eleven lowest scores each day. When the final results for the three days were recorded the top three finishers in each flight received more prize money. And of course, there were closest-to-the-pin winners on all three days. The competition was intense as six different teams finished within seven strokes of the winning score of 183. The winners and Overall Champions are Mick Borm and his lifelong friend Rob Anderson. They bested runners-up Don Erickson and Jarrod Thayer by one shot. Other flight winners were Ilaan Eisenberg and Dennis Halsey, Otto Voorman and Bruce Gibbins and Mike Smith and Dennis Mayer. Congratulations again to all the winners. You put on quite a show!

From start to finish this year’s Desert Classic was a roaring success and once again Robson Resort Communities helped to make it happen as our primary tournament sponsor. All we can say is thank you again and again for your generous support.

It takes a small army to make an event like ours special. Sponsors Lexus of Tucson and Golf Cars of Arizona made it possible for us to offer big time prizes for a hole-in-one. The dedicated staffs in the Food & Beverage areas of HOA 2 and SaddleBrooke Ranch treated us to pleasurable dining experiences every day. Mike Jahaske and his Pro Shop and golf course professionals made golf the best it could be and our band of volunteers, all Men’s Club members, provided all the checks and balances needed to make our events run smoothly. And finally we offer a special thank you to Bob Eder, our Special Event Chairman, who put it all together from start to finish. Well done, Bob.