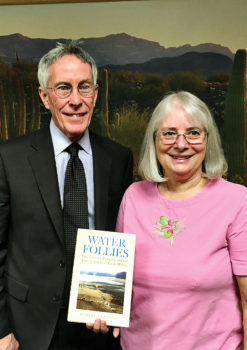 Pam Boedeker
SaddleBrooke Nature Club is addressing the future of our water supply in two sessions this year. The first speaker on this subject was Robert Glennon, Regents Professor, Morris K. Udall Professor of Law and Public Policy at U of A. An expert in the field of water supply, Professor Glennon has received two National Science Foundation grants and served on various advisory committees having to do with water sustainability and planning. He also is the author of Unquenchable and Water Follies: Groundwater Pumping and the Fate of America’s Fresh Waters.
Professor Glennon started his presentation with some dire statistics. One billion people lack access to safe drinking water. Six billion lack adequate sanitation.
Here in the Southwest we’ve seen the drought move to the heart of the Colorado River basin. We are in year 19 of the drought. The question is, “Are we in the 19th year of a 19-year drought or are we in year 19 of a 50- or 70-year drought?”
A treaty in the 1920s regarding the allocation of water was written during a very wet period of time when there was a smaller population. People thought there was a lot more water than there actually was. There was no allowance for evaporation especially as temperatures increased. Lake Powel and Lake Mead are now 50% of what they were. Now we find there is just not enough water to comply with the treaty.
The Great Lakes are another example of decline in water. As they have warmed, there is less of an ice cover. Without that cover more water evaporates.
We have taken our water for granted. Many areas have no water restrictions and continue to have remarkably low water bills.
Professor Glennon talked about the water use in the refining of ethanol.
It takes 2500 gallons of water to make one gallon of ethanol. In contrast how much food could that water have produced?
What we’ve been doing won’t work any longer. More dams, excessive use of water in farming, diverting more water from rivers and more ground water wells are only going to exacerbate the problem.
Conservation is essential. Turn off lights, change lights to LED, use the garbage disposal less or not at all and harvesting water are just a few examples of what individuals can do. Our SaddleBrooke golf course is an excellent example of reuse and recycle.
The problems presented seem insurmountable. Yet Professor Glennon remains somewhat optimistic. Further information can be found in his books and with our speaker, Tony Davis, next month at SaddleBrooke Nature Club.
Reservations!
Until a larger meeting room is found, a reservation system has become necessary. Each month paid-up members will receive a reminder of the next meeting. One or two seats can be reserved by replying to that email. The day of the meeting at 3:50 p.m. seats not taken will be open to others who wish to attend.