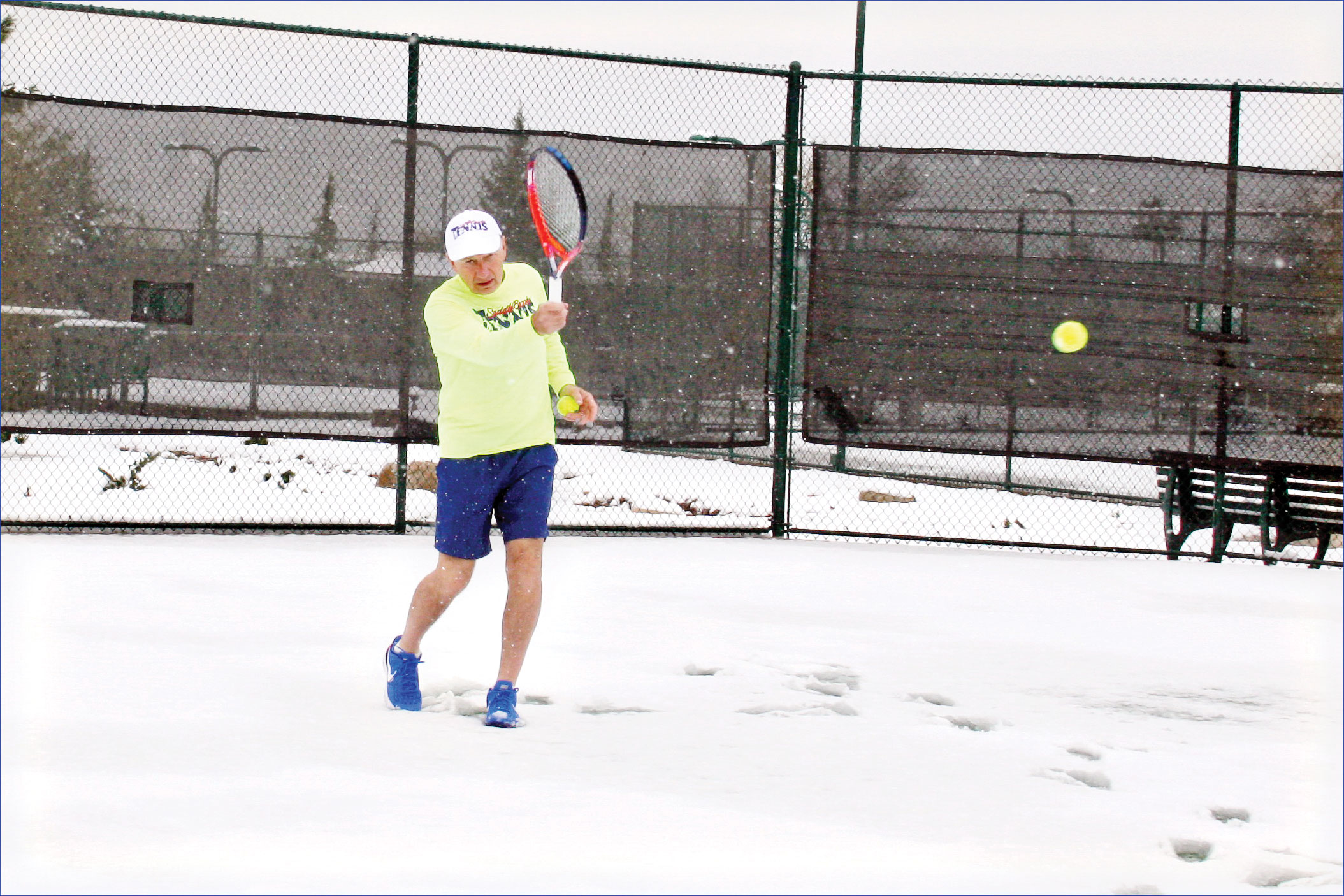 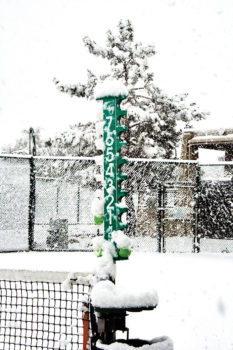 “A fanatic is one who can’t change his mind and won’t change the subject.” Winston Churchill

One of my favorite mathematicians (not that I have that many-Heisenberg being the other), is Vilfredo Pareto who posited that all groups can be divided into two distributions of roughly 80%-20%. With tennis players, the 20% are the fanatics who will take to the courts despite the harshness of the current weather, even the impending tornado. This will to power-through, despite death defying ultra violet rays and challenging temperatures, is a regular feature of the summer court play in SaddleBrooke. Scarcely deterred by 110 degrees and death beams from El Sol bearing down, these players find reward, fulfilment and the occasional heat stroke, by playing in the hottest elements. This gecko-like affinity for heat is mystery of science.

On Friday, February 22 a challenge of an opposite sort laid siege to the stalwartness of these brave (foolhardy?) 20 percenters, as snow and below-freezing temperatures blanketed and enveloped the SaddleBrooke area. Photos of one robust soul are included for those inclined to think that “no way” was anyone crazy enough to strap on their stylish-yet-functional brand name tennis accoutrements and head to the tennis courts, in the faint hope that others of the 20% club would appear for shared punishment. Alas, the man in the pictures is a true outlier in bell-shaped distributions. In fact, he is accurately labeled as a one-percenter, for his persistence and tenacity in the search of just one more tennis rally. However, I have on good authority (the player himself) that the calamity of climate change conspired successfully against our lonely, but persistent Don Quixote. Not tilting at windmills, but rather hitting tennis balls in a futile attempt to defy Mother Nature on a blanket of fresh snow. It was no contest.

Of course, I must point out that there is also a large contingent in the Pareto 20% distribution of golfers in SaddleBrooke, which have been suffering terribly this winter, with late starts due to frost and actual closing of the courses due to the snow. They are relegated to playing simulated golf with Tiger Woods on their Nintendo’s. Truly, a modern-day tragedy or as Charlie Chaplin, an ardent golfer, once said, “Life is a tragedy when seen in close-up, but a comedy in long-shot”. It is rumored that Chaplin uttered those axiomatic words after finishing a round of double-bogey golf due to his multiple three putts in close-up and many out-of-bounds (the long-shot) off the tee box.

Finally, another fanatical quote by Fred Nietzsche, “Fanatics are picturesque, mankind would rather see gestures than listen to reasons.”