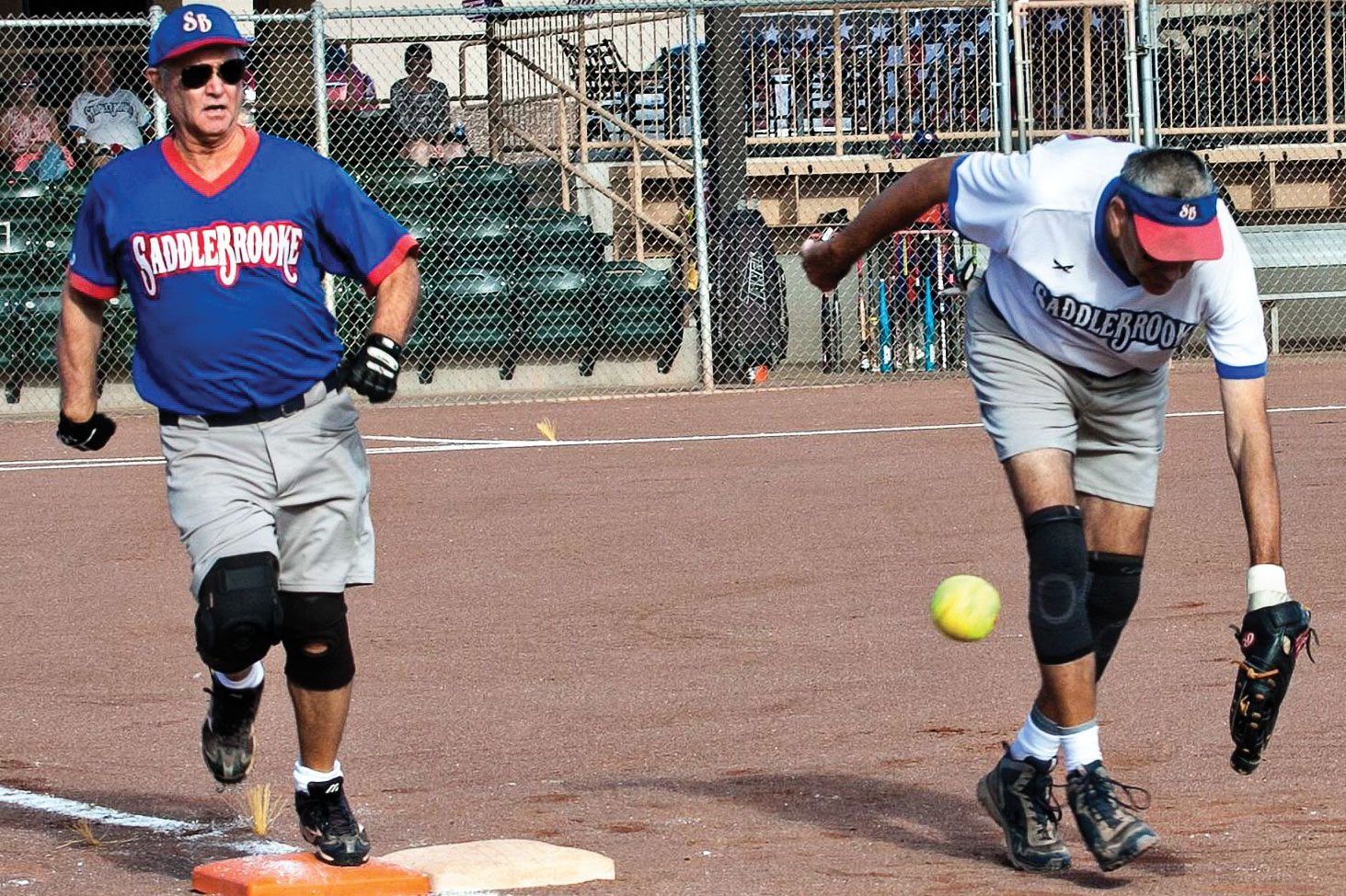 The summer softball season ended on September 24 at the SaddleBrooke complex with four clear pennant winners and one deadlock in the Friday Competitive League. You see here in the Brooke, we play four seasons throughout the year for the enjoyment of still being able to compete. Pennant winners each season get bragging rights and an extra team picture in the paper (usually, but not always, like not this time).

The Monday Community League was dominated by the winners representing W&W Physical Therapy with an 8-2 record. Dominick’s Real Italian finished second at 5-5, followed by X-Pert Automotive and Golf Cars of Arizona at 4-6 and 3-7 respectively. King Mitchell led the winners with an .818 batting average and the top OPS of .833. Steve Schneck hit .804 followed by Harold Weinenger with .761 and the top slugging percentage of 1.543 which also led the league.

Mike “can’t get this guy out” Romano led the league in hitting at .909 which is outstanding. Other hitting stars were Ron Quarantino (.769), Ken Beals (.765), Bruce Keefer (.763) and John Vaaler (.763). The Monday Community League is routinely our most popular league every year with the most teams competing.

The Tuesday Competitive League was a rout by the winning Kristy McInnis-Tierra Realty team with a 7-3 record over the Waste Management group at 3-7. Here in SaddleBrooke Softball our CTS committee attempts each season to put together teams as closely matched as possible based on player ratings to make level competition. Our player rating consists of a player’s ability to hit, hit with power, field/throw, run and whether they can pitch. Might look good on paper but you still must perform. Top individuals on Tuesday for the winners were Len Gann who hit .778 and led the league with a slugging percentage of 1.222, Dave Fuller (.769) and David Bohlman (.732). The second-place collectors were led by Bob Chiarello (.680) and Mark Hojnacki (.680) with Hojnacki finishing second to Gann in slugging.

The Thursday Coyote League was nip and tuck all season with the Window Wizard club narrowly edging out Andy’s Irrigation 5 wins 4 losses. Only five runs for the season separated these two teams in our over 65-year-old league. Ron Romac led the winners with a stellar .833 batting average, followed by Dom Borland at .800 and slugging percentage of 1.320 which led the league. Ron Quarantino led the league in hitting at .857 followed by Leroy Johnson at .680 for Andy’s Irrigation.

And, finally, the Friday Competitive League ended deadlocked at 5-5 with each team scoring 206 runs for the season. Cannot get any closer than that. Hardin Brothers Automotive was led by four of SaddleBrooke’s best: Bobby Carbone (.756), Leonard Gann (.732), Don Jones (.732) and Steve Garceau (.731). Johnston’s Pest Solutions top dogs were Mark Hojnacki who hit .732 and led the season in slugging at 1.293 followed by Mr. Everyday Weinenger at .708.

This was Steve Garceau’s last season with us as he and his lovely wife Carol have sold their home and are moving back to be close to family in Peoria, Illinois. Steve was our head umpire and very active in our association. We will miss you and thank you for everything you have done over the years. Our fall season began on October 8 and if interested in playing contact league President Mark Hojnacki at 817-727-0068 or [email protected]