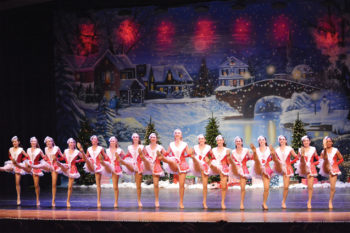 On Saturday, December 15 and Sunday, December 16 at the DVPAC, we can promise that it is “beginning to look a lot like Christmas” and Tucson Dance Academy is making a habit of doing that in the SaddleBrooke community! Founded in 2008 by Tammy and Tom Booth, TDA has grown, not only with its number of students and professional performances, but also in its dedication to helping young people become better dancers, performers and people.

The story began when Director Tammy Manville Booth was born here in Arizona. Her dad, Don Manville (of West Tucson’s Manville Road fame) and her mother, Wanda Manville (owner and director of Tempe Dance Academy for over 60 years!) gave birth to a talented baby girl who, by the late 1970s, had become the number one gymnast in the United States and number seven in the world! Later she moved to Los Angeles and appeared in movies, commercials and also as a Rockette, giving Tammy some big-time professional holiday show experience. In 1989, she, her mother and husband Tom, founded the Spirit of Christmas and it blossomed into a holiday must-see show in the Phoenix area. Ten years ago, Tom and Tammy wanted to return to their Tucson roots and they did so, and almost immediately they founded the Tucson version of TDA and quickly thereafter, Tucson’s own Spirit of Christmas holiday show. In this, its tenth year, Spirit is exclusively showing at the DesertView Performing Arts Center, giving this special show a home in the beautiful community of SaddleBrooke.

This year’s performance is a mix of “Bing Crosby and the Angel Gabriel.” The show will feature Santa, Rudolph, Frosty and the “Tucson Rockettes,” but Tammy and Tom feel strongly that the spiritual dimension of Christmas also be honored in an artistic way. There are some emotionally moving and unifying performances by the cast of over 100 dancers and singers, including a mix of professional performers and up and coming talent as well. Tucson Dance Academy uses stunning backdrops, props and this show is something that the “old pueblo” can be proud of. In that regard, this past summer their hard work payed off with national recognition. Participating in one of the most prestigious dance competitions in the country (Dance Masters of America), Tucson’s TDA claimed the top awards in both the younger and older dance divisions: double national champions for these talented and hard-working kids. TDA’s motto? “Work hard and stay humble,” and that hard work and humility will be evident to those lucky enough to get a seat to this year’s Spirit of Christmas performances at DVPAC on December 15 (2:30 p.m. and 7:00 p.m.) and December 16 (2:30 p.m.). In SaddleBrooke this year, regardless of whatever weather December may bring, it’s beginning to look a lot like (The Spirit of…) Christmas!

The holidays will be a little brighter for many families in the Oracle and San Manuel area thanks to the efforts of SaddleBrooke Community Outreach (SBCO). Just before Thanksgiving, SBCO will deliver 50 holiday food baskets to area residents in need. Each basket will be filled with the traditional Thanksgiving items, including a large turkey and all the trimmings. Special baskets will be provided to those with larger families. The baskets will be laundry baskets – making it easy to transport the food and provide the recipients with a useful household item.

The Holiday Food Basket program has been in existence for many years. We are seeking volunteers who would enjoy helping SBCO combat the food deficiencies of our neighbors. If you would like to be a Holiday Food Basket volunteer, please contact Joan or Rich Roberts at 825-7577.

If you want to improve the lives of youngsters living in nearby communities, you can do so through a donation to SaddleBrooke Community Outreach (SBCO). Thanks to the generosity of SaddleBrooke and SaddleBrooke Ranch residents and local businesses, SBCO provides children with food, clothing and educational opportunities.

We are indebted to the companies that sponsor our fundraisers as well as individual contributors. Those who donate goods to the Golden Goose Thrift Store as well as the store’s patrons also make a significant financial contribution to SBCO. You can contribute by participating in the annual Walkathon, attending the home tour, donating to a food drive, writing a check for Adopt-a-Family and Adopt-a-Child, using your Bashas’ Community Card or Fry’s reward card when buying groceries or make a general end-of-year or memorial monetary donation.

Your financial contribution, along with many hours of volunteer labor, make it possible for SBCO to have a big impact upon the lives of children and families who really need our assistance. We thank you for your support.

Rebecca Green is an intervention teacher at Coronado K-8 School who assists middle school students (grades 6-8) who need extra help or who are at risk for failing multiple classes, including reading, writing, math, science and social studies. Some students come to her class daily for language skills instruction and since last year she has been teaching her students study skills. Many of her students struggle to stay focused on a task due to attention deficit hyperactivity disorder (ADHD). Many are kinesthetic learners who wiggle, tap, swing their legs, bounce and often just can’t seem to sit still. They tend to be good athletes but may have trouble with reading and other academic skills. These students learn through their bodies and their sense of touch.

Green submitted a grant request to SaddleBrooke Community Outreach to purchase two stationary desk bicycles and five balancing balls that could be used as alternative seating in her classroom. Her request was based on research studies that concluded children with ADHD could focus better when sitting on ball chairs and that all students who could move around were more attentive. She sought a 20 percent improvement in both the students’ focus and academic achievement.

In her classroom, a card system is used to document unfocused or inappropriate classroom behavior. The consequences of behaviors include a warning, lunch detention or office referral. Green has already seen an improvement since using the alternative seating options. Although she first was concerned students might treat the bike or balls as toys, this has not been the case. There has been a significant improvement in both behavior and performance among her students. And, as she noted, “It’s far safer than students tipping their chairs backward or to the side in an effort to get the movement their bodies crave.”