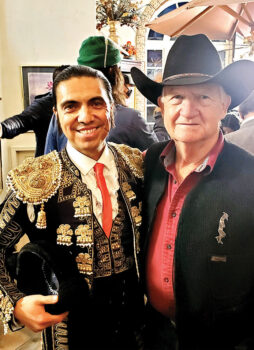 Well, maybe not, but our own Stuart Watkins is coming soon to a theater screen near you.

He appears as an extra in the forthcoming film Toro de Oro, which tells the story of Valentin Gallardo, a third-generation Mexican matador who, after a near-death injury in the bullring, is torn between the love of his life and his love for bullfighting. Valentin must come to terms with what is truly important to him, family or fame. It is a story about family, love, honor, and commitment, as well as the story of bullfighting culture in Mexico, which is slowly being erased and forgotten.

Rogelio Camarillo, an actor Stuart met previously in Tucson, stars as Valentin Gallardo. The film was directed by Pedro Perez Nuñez and produced by Parco Robertson.

In addition to appearing in the film, Stuart is one of the executive producers. Shooting was completed in Phoenix on March 12. A preliminary showing will be held in Phoenix in late April or May, with additional showings in upcoming film festivals.