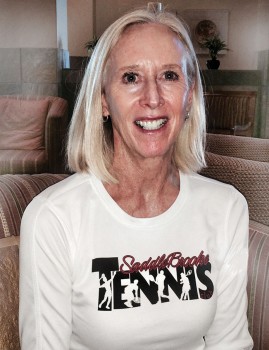 Joyous and helpful are the terms that describe the STC volunteers who make our programs so successful so it is no surprise that those two terms go far toward describing Debbie McGeehan. Let me introduce her to you.

Debbie’s love for the active life stems from the days when she crewed on her parents’ sailboat off the Atlantic coast. Tennis did not even enter her life until after college. That’s something all Brookies should think about. Before marrying tennis pro Gene McGeehan, she was accepted into the Army Nurse Scholarship Program. The three years spent as a lieutenant began her assent to the rank of Lieutenant Colonel and the status of Chief Nurse of the Hawaii Army National Guard.

So she is a nurse. Good thing, because a player recently collapsed on the court; Debbie rushed to his side, determined his condition, administered CPR, issued instructions to call 911 and then administered AED. She saved his life. Speaking of AED, all Brookies should become familiar with the location of the devices and their proper use. Debbie developed the skill while she was a flight attendant for North West Airlines. Oh, did I fail to mention that phase of her life? Believe me getting Debbie to talk about herself is a task. We are merely touching on the highpoints here.

As if saving one life was not enough, a couple of months later another man collapsed on the golf course. Once again she administered CPR, called 911, applied AED and save his life as well. Clearly Debbie makes for a good partner; nothing like having a highly qualified nurse at your side.

STC has had Gene and Debbie for the last eight years. Getting her to discuss her many accomplishments as the club’s Social Activities Liaison is like trying to open a bottle of Zinfandel without a corkscrew. She takes no credit. But she willingly gives recognition to others while revealing more about STC’s social program. She says it is a healthy, enjoyable experience for players and non-players alike. The coordinators receive her congratulations for helping our Board to match skill levels for Organized Play events. She praises our volunteers who help keep our 19 courts in top condition. She applauds STC for having Master Stringer Steve Leane on hand, for the devotion of the seven teaching pros who voluntarily conduct free clinics for all levels of players, to Riley Jackson for volunteering with the club’s excellent website, to Pam Corrigan for her marketing efforts and, in particular, to TJ Duffy who as president personally appears and participates in the club’s many functions.

But wait! This is an article about Debbie. Notice how she shifted the recognition away from herself and highlighted the many volunteers who make our programs work. That’s the way she is.

Most remarkable was Debbie’s notation about the most valuable aspect of her STC experience. Most valuable are several club members who have become her best friends with whom she plays tennis, goes to movies, dines, shares moments, shops and entertains. We understand that metric. Tennis is a sport that remains with us for many years through the friendships we develop on the courts. Join us.