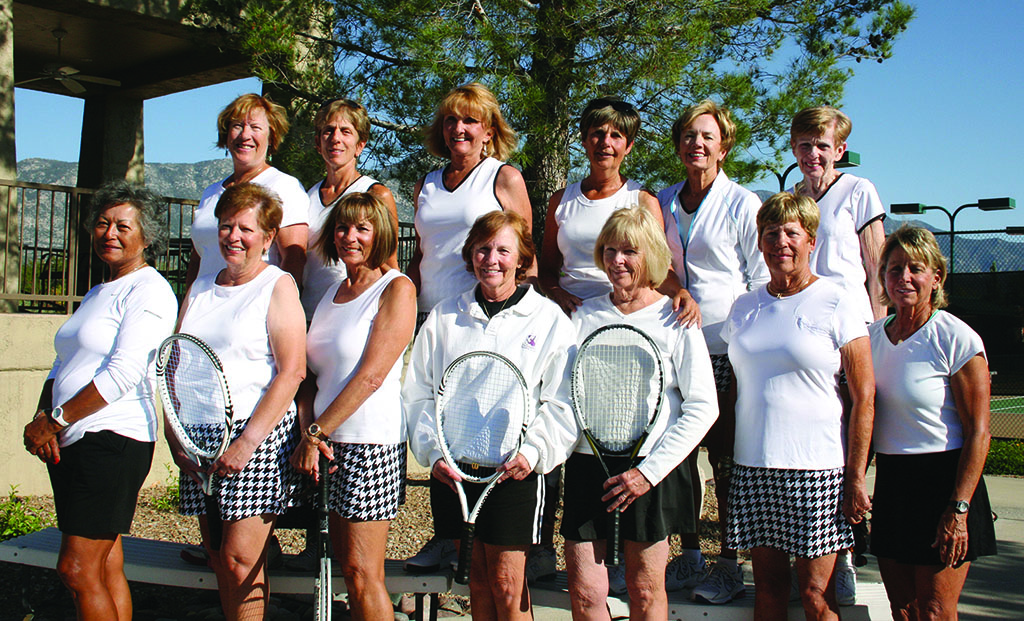 The SaddleBrooke 7.0 ladies place second at the Southwest Sectionals.

Southwest Sectionals was an awesome experience for everyone on the STC Ladies 7.0 team, captained by Mary Jo George. There were a few bumps in the road such as 95 degree humid heat on the very first day, rain delays on the second day, one player getting the flu and another getting lost on her way to the match.

Nevertheless, everyone rallied and faced the obstacles and it ended up being a great experience! All had much fun, and all did a fabulous job on the court and off the court cheering for their teammates. That’s what Ladies Tennis is all about at STC.

The ladies got off to a great start, winning their first two matches, the first against Himmel; the second match was against Southern New Mexico. On Saturday, under the threat of rain, the team managed to play one match, unfortunately losing to one of the Greater El Paso teams. And the rains came down and kept coming, so all play was suspended for the day.

Saturday night was party time; more than 200 players and guests attended. Good food, music and dancing! Again, because of the rain, it was held in the fifth floor garage instead of their outside patio. A party in the garage? Still great fun!

Sunday more rain, but eventually we got our players on the courts to finish our last two matches of the tournament. We lost our first match against Central Arizona, a very powerful and talented team. During the regular season they had a 12-0 record and a then a 5-0 record for the tournament. Right after that match we went on to convincingly win our second match against another El Paso team.

During our last match we gave it our all and won three courts. We were neck-and-neck with Himmel and Greater El Paso for second place and then, given all the stats of the tournament, we proudly took second place.

In summary, the USTA tournament director and volunteers did a fabulous job under some very adverse weather challenges. All of the ladies on the teams were very nice, gave fair line calls, and exhibited great sportsmanship. A special note to the awesome power and kindness of the CAZ team that came in first! There was a little confusion about who came in second so our team had already left when we were called back to accept our second place awards. The entire CAZ team waited another 15 minutes for us to come back so they could give us hugs and congratulations.

Thanks to all for the support from the SaddleBrooke Tennis Club, the players that practiced with us, and our spouses and many friends!