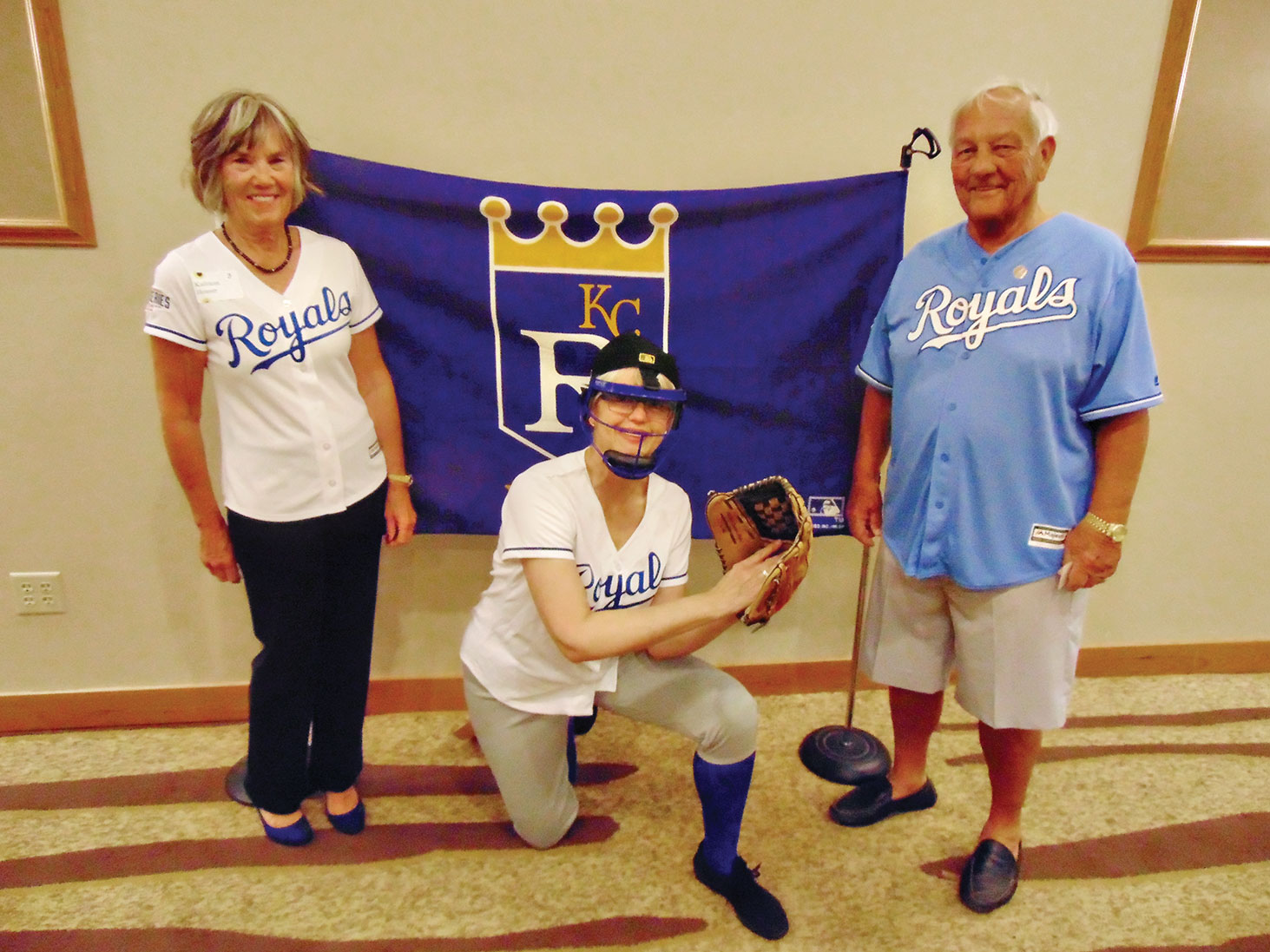 Surrounded by dinner tables of blazing yellow sunflowers, the guests wearing shirts with Jayhawks, Wild Cats, Hornets, Icabods, Tigers, Falcons and other Kansas school mascots were welcomed to the MountainView Ballroom by a World Series champion catcher look-a-like, Salvador Pérez Diaz. They arrived complete with team jerseys and memorabilia in tow to celebrate Kansas Day, their past Kansas connection and or the present including the Kansas City Royals 2015 World Series victory. All in all they shared and recalled their days living in the Sunflower State.

Recalls included record breaking sports in Kansas City to the soaring heights of the aircraft industry in Wichita as well as sustaining arboretum botanical gardens in Belle Plaine, an hour south of Wichita, through Robin Macy, philanthropist and founder of the Dixie Chicks. Indeed there were many experiences and stories told by the 65 guests. Guests provided Kansas trivia, Royals baseball facts and lots of mascots.

The facts, stories and information about Kansas surprised many, especially the Wichita East High School alum, which numbered five in the audience, who knew! To mention just a few: Baker University, founded in 1858 is the oldest college in Kansas. Helium gas was discovered in 1905 at the University of Kansas and that a spot of land in Kansas is the Geodetic Center of North America. So when a Kansan says, “I am the center of the universe,” heed the message!

Indeed the KC Royals were the center of the universe when the Royals won the franchise’s first division title (in 2015) since 1985 and first Central Division title ever (the Central was created in 1994). The Royals went on to win the 2015 World Series– the first championship for the Royals since 1985 – beating the New York Mets four games to one. The name Royals originates from the American Royal, a livestock show, horse show, rodeo and championship barbeque competition held annually in Kansas City since 1899. You can say things are cook’n in KC.

Kansas has 93 post-secondary colleges and universities. College Trivia Name the Mascot, developed by Fira Stout, challenged the group asking them to identify mascots from 25 colleges and universities. What is an Icabod, anyway? Only Washburn University alums know for sure. A Kansas “skunk hat” paraded around the room, daring anyone to comment. Indeed college memories ran deep as Kansas rivals teased, taunted and cajoled one another. I suspect we will see more mascots at future Kansas celebrations!

The activities of the night were completed with many a comment by those who attended who were already looking forward to next year and new traditions. Plans are underway for the fourth annual Kansas Day party in January 2017. If you are interested in participating please contact Mary Kopp at [email protected]

It’s that time of year for Montanans in SaddleBrooke to get together. Anyone with connections to Montana, no matter how long you have been away, is welcome to attend. Save the date—April 16 at 5:00 p.m. in the HOA 1 Activity Center.