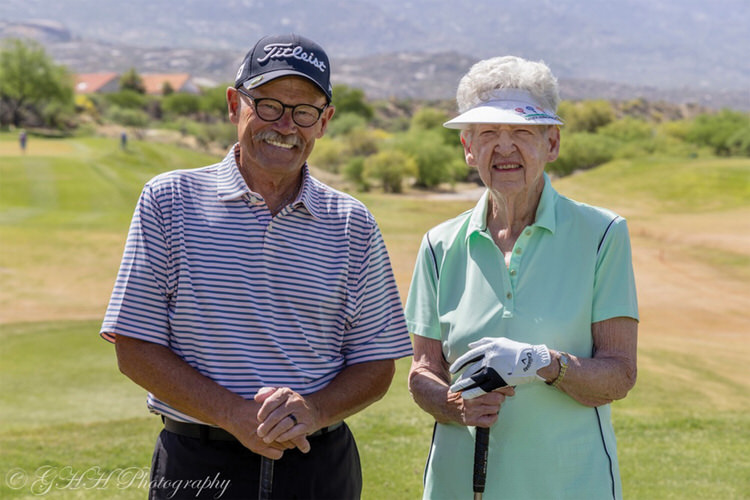 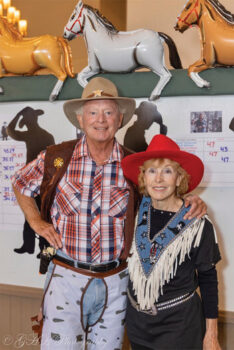 We SaddleBrooke Lady Niners thoroughly enjoy golfing with each other, but we also like golfing with men. On April 26 we held a fun Ladies Choice tournament. Each Lady Niner invited a gentleman of her choice (who was not her husband or partner) to play with her. The theme of this event was Best in the West. How fun it was to dress like cowgirls and cowboys. Out came our cowboy hats, bandanas, Western shirts with fringe, cowboy boots, and even denim, definitely not our usual golf attire.

The format for this event was a Modified Chapman with teams of two, a lady and a man. Both players on the team hit tee shots. Then they played their second shots using their partner’s tee shot location. After both players’ second shots, the team selected one ball location from which to complete the hole, using an alternate shot format. If Player A was last to hit the selected ball, then player B hit next. Alternate shot continued on the fairway and the green until the ball was holed out. This format is truly a partnership.

The team handicap was calculated using 60% of the lower course handicap plus 40% of the higher course handicap. Ties were broken by a card playoff comparing scores on holes in order of difficulty. Congratulations to long-term Niner Gloria Franklin and her neighbor Jerry Hollingsworth for winning this golf tournament.

After the round of golf, the ladies and their guests attended a campfire luncheon at the Vistas Restaurant of barbecue chicken, Southwest coleslaw, mac and cheese, and homemade cornbread, with ice cream sundaes for dessert. Many enjoyed our Wild Wild West drink for the day, which was whiskey, peach schnapps, and cranberry juice. Winners were announced not only for golf but also for best costumes, cash raffles, and door prizes. Congratulations to Wanda Ross and Tom Houston for the Best Western Attire.

May is special because that’s the month for our Presidents Cup, a match play tournament. Usually, golfers compete for the lowest score for the full nine holes, which is called stroke play. Match play is a very different format; each golfer competes against only one other golfer. The two golfers compete to win more holes than their opponent. In essence, it’s a series of separate games for each hole. After every hole, the scores are compared to determine who wins that hole. Whichever golfer completes the hole with the fewest strokes wins the hole, and therefore a point. If both scores are identical, the hole is halved, resulting in no change to the overall score, and the score for that hole is “all-square.” A winner is declared when the player in the lead has a score greater than the number of remaining holes, which makes it impossible for the opponent to win. This is a very fun tournament format.