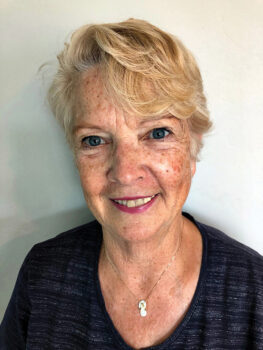 The greatest satisfaction of writing about interesting people is being able to live vicariously through them.

I recently visited with Romayne Trudo in preparation for this article. Romayne is interesting and engaging, but she is also very modest. While she related her history in a matter-of-fact way, in reality, Romayne’s life story is anything but matter-of-fact.

Raised in North Reading, Mass., Romayne was born into a military family, as her father was a 25-year Navy veteran who served in WWII and eventually worked at the Massachusetts Institute of Technology (MIT), and her only sibling, a brother, also served in the Navy. Her mother was a homemaker.

Romayne holds undergraduate degrees in nursing and radiology. She graduated from the University of Massachusetts, Dartmouth and then attended Salem State University, where she received her M.Ed. in education and counseling.

With her extensive educational background, she was hired to teach radiology at North Shore Community College in Beverly, Mass. and, after five years, she became a faculty member at Middlesex Community College, where she taught radiology and psychology. She, actually, was hired by her future husband, Dale Trudo, who eventually would become dean of the Health Careers Division of the college.

While at the college, she organized the Pre-Health Careers Program, which helped to prepare community college applicants for the clinical fields of radiology, ultrasound, dental hygiene, nursing, medical lab tech, dental assisting, dental lab tech, and medical assisting. She worked at the college for 20 years and, in Romayne’s words, “I loved the job—it was so rewarding!”

Romayne and Dale moved to Prescott, and while there they both immersed themselves in several animal rescue groups. Romayne helped to initiate a trap, neuter, and release program for cats and worked to ensure that abandoned pets would have foster homes, while Dale built shelters for abandoned dogs.

In 2005, however, the call of sun and warmth drew them to SaddleBrooke. Once established in SaddleBrooke, Romayne became involved with the Coalition Against Domestic Violence and became VP of the organization. She also worked as an RN at Sierra Tucson for three and a half years and Cottonwood Tucson for seven years. Now, she is devoting her time to animals.

Romayne has always worked towards saving animals, including volunteering at a kennel for rescued greyhounds from the Seabrook Greyhound Dog Track in New Hampshire. Through the efforts of many volunteers and legislation, Greyhound tracks in New Hampshire and Massachusetts were closed forever. So, it was natural that she became involved in the SaddleBrooke Pet Rescue Network. She currently serves on its board.

With exuberance, she discussed the 10th anniversary of the Pet Rescue Network, which will hold its annual (except for the COVID 2020 year!) fashion show and luncheon on Nov. 10 and 11. Tickets, which sell out quickly, will go on sale in September.

Besides the love of animals, Romayne also enjoys golf, billiards, and reading. By the way, both she and her husband are certified scuba divers and licensed private pilots. Sigh… vicariously, indeed!

To become involved in the Pet Rescue Network, contact Romayne at 520-834-5718. You may also go to www.sbpetrescue.com for further information.

“Until one has loved an animal, a part of one’s soul remains un-awakened.”—Anatole France