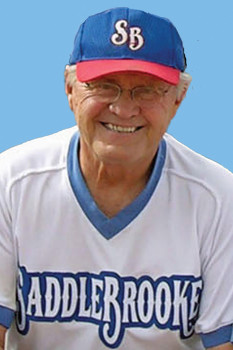 Jim Westerberg was honored by the South High Alumni Association, Denver, Colorado, with an induction into the 2014 Baseball Hall of Fame. Jim played varsity baseball for two years in high school. Local newspapers picked the 1956 team to sweep city and state titles with no problems; the team finished in second place.

The 1957 team was not expected to do well; their seniors from the stellar 1956 team had graduated. However, they won the city playoffs, advancing to the state championship game. They finished in second place. The high school teams from South High from 1955 to 1960 are among the best in baseball history.

Jim went on to serve our country in the jungles of Viet Nam. He was a parachute infantry platoon leader. Assigned to the same 173rd Airborne Brigade was another South High ball player. They spent their time talking about their former coach and baseball.

Fast forward some more years, Jim was recruited to play senior baseball. He plays twice a week for the Denver Fossils, during the cool Colorado summer months. Jim uses the lessons and skills learned from coaches and friends to enhance his life with positive thoughts: Make every moment count. Make new friends. Don’t quit. Strive to try new things and give every opportunity and friendship your best effort. He is an inspiration to ball players past and present.

Congratulations on this honor, Jim, from your buddies at SaddleBrooke Softball.