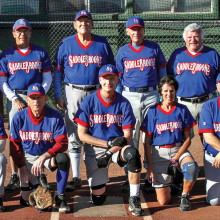 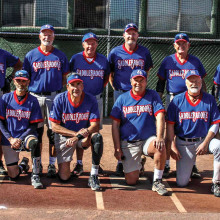 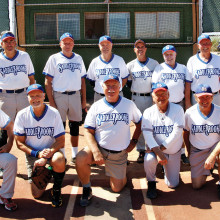 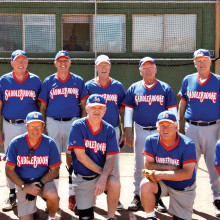 SSSA thanks Patrick Shaffer Dentistry for sponsoring the tourney again this year.

SaddleBrooke Senior Softball Association (SSSA) got 80 players to play four games in front of hundreds of fans. SSSA volunteers fed them with the help of Doug Wagers, aka the Window Wizard, on his Louisiana Cooker with brats and dogs and Dominick’s Real Italian Restaurant’s cannolis. SSSA entertained the throng with music and play-by-play fun. Even the losing teams’ members had face spanning smiles.

Game One Recreation League: Featured dueling spouses as managers with Janet Jarzembinski for the home team Villas Assisted Living and Paul Jarzembinski for The Charles Company visitors. Janet’s team nearly pulled this one out—almost. But on the last play Janet was thrown out at home by a half-step trying to score the tying run. Final: Paul’s team 15, Janet’s 14.

Game Four Coyote League: Greg West managed the Waste Management visitors to a 17 to 14 win over Paul Butler’s X-Pert Automotive. Ron Quaranti—uh, “Q” was the big hitter (so to speak) for WM with four and four including a triple and home runs. The losers actually had three 1.000 hitters, George Corrick, Dominick Borland and Jim Smith. But they still lost!

SSSA plays four of these tournaments each year. See you at the next one!