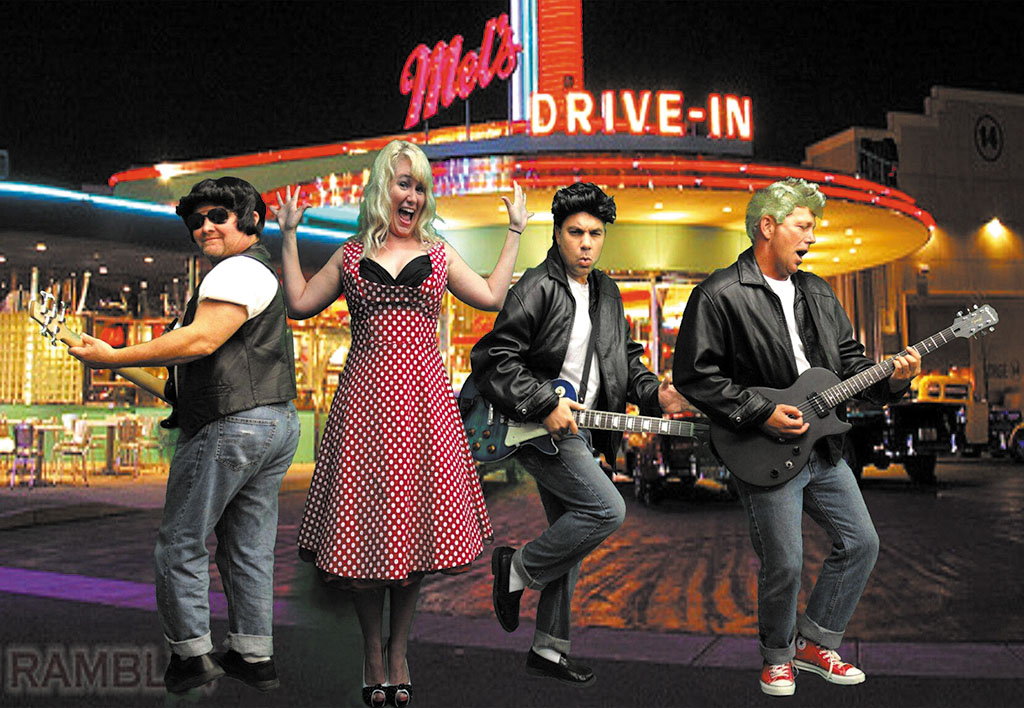 Three Jacks and a Julie will entertain us at the Sock Hop on January 14!

We had so much fun dancing to Three Jacks and a Julie at the last Sock Hop, we will do it again! The night was a rip roaring success. It was sold out. When the band played the first song, they immediately had us in the palms of their hands. We realized we were in for a night of nostalgic fun. I think we all enjoyed a return to our youth with our partners and friends. There were many poodle skirts, letter sweaters, and class rings on chains, but there were just as many who came in today’s styles. It was really fun to watch those full skirts flare on the fast turns, as everyone was rocking to the music.

On January 14 Mountainview Ballroom will be the site of the next ‘50s and ‘60s Sock Hop. There will be the same great band, Three Jacks and a Julie, also known as “Wild Ride” when they are playing for Country Western dancers. This time there will be no food; well, a few M&Ms to keep our strength up. But there will be a cash bar because our teenage dreams have come true and we can now legally drink alcohol. Just a sip seems to relax our inhibitions and improve our dancing.

Three Jacks and a Julie will play many of our favorites from the ‘50s and ‘60s. The Everly Brothers, Elvis, Roy Orbison, the Beach Boys and Patsy Cline. The band is sooo talented. Julie had the songs from movie The Coal Miner’s Daughter memorized so she could perform them all when she was five years old; there is a recording to prove it. Frank toured up and down the West Coast in bands from the age of 18. From Alaska to Pocatillo Idaho, he won awards as a Frank Sinatra, Elvis and Roy Orbison impersonator. The musical experience of the four members of the band adds up to over 120 years. I don’t have to build them up in this article, their music speaks for them. When they play the Righteous Brothers’ Unchained Melody, there isn’t a woman listening who doesn’t want to be up on the dance floor in her partner’s arms, swaying to the music. Go ahead, ask them, they will play it again. It is one song guaranteed to have everyone out on the dance floor (at the last Hop 95 percent were on the dance floor when they played Unchained Melody).

Tickets for this night of nostalgia will be on sale in the MountainView Office; they are $9.50 per person, all inclusive. Doors and cash bar will open at 6:00 p.m. and the band will start performing at 6:30 p.m. They will play until 9:30 p.m. Wear your poodle skirt and saddle shoes, or your ‘50s-‘60s costume, or dress as we do today. Come and listen to the Band or come and dance. This promises to again be a very entertaining evening. Return to those youthful days; let’s have fun at a (shoes on) Sock Hop!

I hope we see you there.