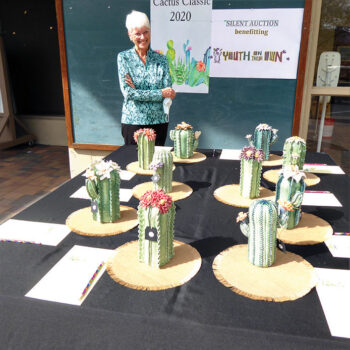 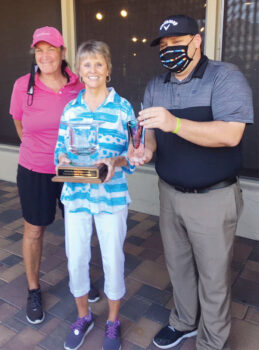 The last major tournament of the year 2020 for SBWGA-18, The Cactus Classic, played over three days of golf in mid-November on all three nine-hole courses. Our golfers participating in this low net tournament were divided into five flights, all named for varieties of cactus. This test of skills and endurance did not deter Sherry Fitzpatrick who was the Overall Net Winner with a terrific total net score of 208.

In addition to the winners named above, our club charity for this year, Youth On Their Own (YOTO), came away a really big winner. Christine Smith, an accomplished clay potter, created ten whimsical clay cactus statues that were swept up quickly in a silent auction that raised $1,735, which was doubled by another YOTO donor for a total of $3,470 for TOYO.

The year 2020 has not been without its challenges for businesses as well as individuals. In our 18-hole women’s golf league, we are thankful that our sponsors have participated with us throughout the year and we wish to thank them.

SBWGA-18 looks forward to more golf tournaments and more camaraderie on the golf courses in the coming year 2021. Happy holidays.