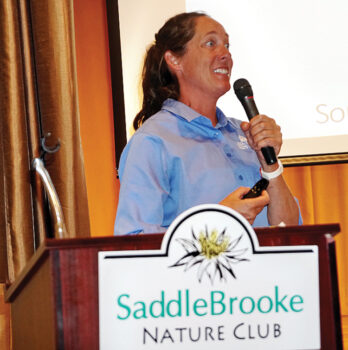 A speaker who loves her job brings energy and enthusiasm to her presentation. That was certainly the case with Jessie Byrd, manager of the Pima County Native Plant Nursery. Jessie shared photos and information about her beloved Queen of the Night with SaddleBrooke Nature Club.

Jessie is devoted to rescuing the Peniocereus greggii v. transmontanus, best known as Queen of the Night or night-blooming cereus. It’s that ugly “dead” branch shooting up from the desert floor that blooms its gorgeous white fragrant bloom just one night a year.

There are many night-blooming cereus, but Jessica is interested in the one that grows only in the Tucson and surrounding areas. The plants are usually found under a nurse plant such as a mesquite or creosote. Photo after photo of various sized brown sticks were shown with tubers that reportedly can weigh as much as 100 pounds. They were brown like jicama and looked like huge, deformed carrots or parsnips.

The tuber allows the Queen to keep one branch above ground that is alive. It can be broken off and regenerated many times. This plant is very drought-tolerant. It may survive and increase tis presence as the climate gets warmer.

One of the most interesting findings Jessie reported was that Desert Queens rescued from the same site and replanted in several different places still bloom the same night! On that night the Sphinx moth, its best pollinator, swoops in and drinks the pollen.

Jessica, her staff, and their volunteer crew inspect public property about to be bulldozed for construction projects such as road widening. They identify native plants, dig them up, and take them to their two-acre plant nursery. There some 21,000 native plants are cared for, potted, then replanted in public spaces where they will be enjoyed by Pima County residents. They cannot be sold.

The nursery also propagates new plants from wild-collected seeds. This includes the Saguaro. They have a wild seed library of over 400 species.

The general public cannot go out into the desert and dig up cacti. Jessie holds a transport license, which gives her and her crew permission to remove cactus. Each plant is then given a county-approved tag.

There is an art to properly dig up The Queen. It’s almost like an archeological dig where holes are started outside the perimeter of the plant. Carefully, dirt is removed until the tuber is found. Precaution is necessary to avoid digging into the tuber. If a tuber is damaged it will be laid out at the nursery to heal before it is potted.

Many transplanted species can be seen at Pima Prickly Park, also sponsored by the Tucson Cactus and Succulent Society.

Volunteers are needed to come join this quest for saving The Queen and other native plants. Jessie can be contacted at 520-488-8022 or [email protected]

SaddleBrooke Nature Club meets at 4 p.m. in the MountainView Ballroom the second Monday of each month.