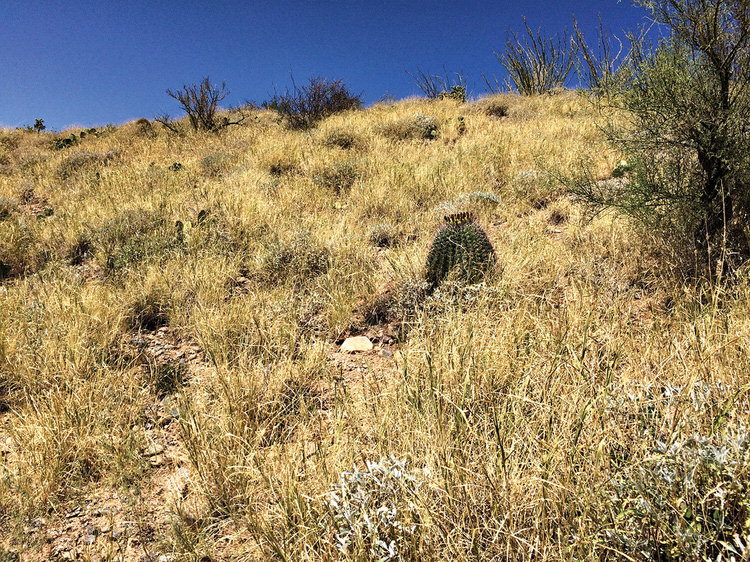 Buffelgrass-covered slope at the Preserve

If you’ve lived in Southern Arizona for some time, you likely realize that fire is not common in the desert. Deserts simply do not provide enough fuel to support fires of any significant size or severity, but this situation is changing rapidly. Two fire-loving grasses are invading the desert landscapes of Southern Arizona. Buffelgrass and its close cousin fountaingrass are perennial grasses native to Africa and parts of Asia. Buffelgrass was introduced to Arizona for erosion control and fountaingrass as a landscape ornamental. Both have adaptations that allow them to out-compete our native desert plants. Consequently, they have come to dominate hundreds, if not thousands, of acres in Southern Arizona.

Over the past two decades, residents of the Catalina Foothills have watched the spread of buffelgrass and fountaingrass across the slopes of the Santa Catalinas adjacent to their community. Large patches of buffelgrass are visible from a distance, easily distinguished by their distinct mustard-yellow color.

With the spread of these two grasses comes a greater threat of wildfire, which became apparent in the summer of 2020. The Bighorn Fire began high in the slopes above Oro Valley. At first, it seemed the fire might move down in elevation, into the buffelgrass-invaded slopes of the Catalinas Foothills, but thanks to the valiant efforts of our firefighters and to strong northeasterly winds, we were spared the destruction that would have resulted if the fire had entered the massive stands of buffelgrass just north of the city of Tucson.

Buffelgrass burns hot and fast. Temperatures range between 1300 to 1600 F, and the fire moves at a speed of two to three miles per hour under moderate weather conditions. Flame height can exceed 20 feet. Our native plants are not adapted to withstand such fires, and, consequently, buffelgrass fires can transform a biodiverse desert into buffelgrass grassland almost overnight.

Fortunately, here in the northwestern corner of the Santa Catalinas, we have the opportunity to avoid the same fate. Buffelgrass and fountaingrass are relative newcomers here. Although the record 2021 monsoon season resulted in bumper crops of each species, it’s not too late to act. In fact, over the past six months, SaddleBrooke TWO has been working with the Tucson Audubon Society to tackle buffelgrass and fountaingrass around the golf course and common areas. Meanwhile, the Desert Museum has been offering residents hands-on opportunities to learn how to identify and control these species.

It’s going to take all hands on deck to save the stunning slopes of the Santa Catalinas that form the beautiful backdrop to the SaddleBrooke community, but what’s at stake is the very character of the community, the natural beauty that drew so many to this area. Managing invasive species becomes exponentially more expensive as their populations grow and spread. The time to act is now.