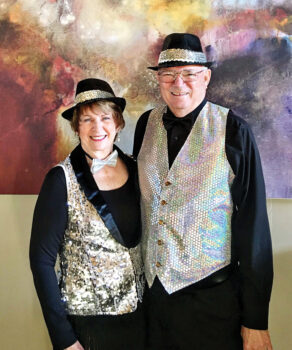 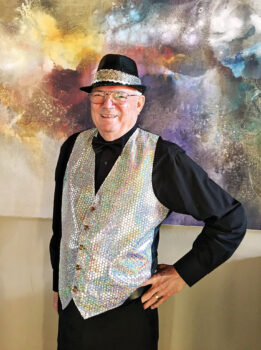 He sings, he dances, and so much more.

Sam has been with the SilverBelles for about five years. His many talents, besides singing, dancing, and playing guitar include Master of Ceremonies, sound system manager, photographer, and chauffeur.

He is married to Laurie, one of our SilverBelles. They met in junior high, dated in high school, and in June they will be celebrating their 60th Anniversary. They moved to SaddleBrooke in 2005.

Following is a Q and A to get to know Sam.

When did you first discover your love of music?

“There was always music and singing in our family when I grew up. We would sing along to any music being played, whatever the source, and someone in the house would break out in song at any moment, so singing came naturally. My brother and I took violin lessons, and my sisters had piano lessons, so we learned to read music at an early age.”

How long have you played guitar?

“I got my first guitar, a $25 one from Mexico, in the 1960s when my voice instructor wanted me to get into singing folk music and participate in Hootenannies. (Remember those?)”

Where did you live before SaddleBrooke?

“I grew up in Downey, Calif. (in the L.A. area) and graduated from Long Beach State College as it was called at that time. After college I went to work for JCPenney Co., and moved around a lot with different assignments, dragging my wife and family along with me. We started out in stores in Los Angeles and Orange Counties, then moved to the San Fernando Valley. From there, we went to the Bay Area and lived in Pleasanton. Then back down to Carlsbad, near San Diego. The next assignment was in Honolulu for three years, then back to the mainland to Mission Viejo, Calif. My first assignment as store manager was in Idaho Falls, Idaho, then on to Portland, Ore., where we stayed until I retired. After retirement we moved back to Carlsbad and then to SaddleBrooke.”

What are your hobbies? Do you collect anything?

“I like to do scroll saw artwork. That’s the only thing I would call a hobby. I’m an avid reader and the only things I collect are memories.”

What is your Most Memorable performance?

“During a Talent Show here in SaddleBrooke, I was doing a song with my guitar. I dropped the guitar on my way out to the stage and it got badly out of tune, so I just faked playing it (air guitar?) while singing basically a cappella. Afterwards, some people said my guitar must have been disconnected from the amp because they couldn’t hear it very well.”

“When I first started performing in front of people, I would really get a case of the jitters, along with a nervous stomach. I was afraid of how the audience would react if I hit a wrong note or something. I recognize that audiences aren’t there to judge you, but just want to be entertained, and will overlook a “goof” here and there. Hardly any jitters anymore, especially in front of SaddleBrooke audiences, because I consider them as friends.”

If you could be described in one word?