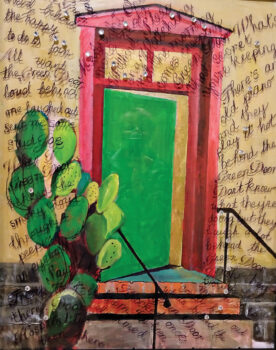 It’s in the lyrics, Marsha Bellsey’s winning entry in the SaddleBrooke Fine Art Guild’s “One Image, No Limits” contest. (Photo by LaVerne Kyriss) 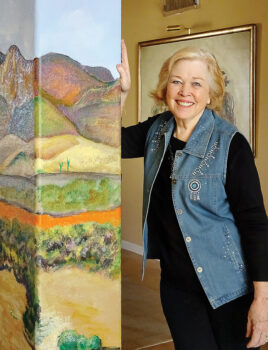 Marsha Bellsey stands by the mural she painted on a dining room pillar during the pandemic. (Photo by LaVerne Kyriss)

Marsha Bellsey’s painting, “It’s in the lyrics,” was honored for most creative approach in the intermediate/advanced category of the SaddleBrooke Fine Art Guild’s pandemic season “One image, no limits” contest.

“I wasn’t going to enter, but then when the deadline was extended because of the pandemic, I thought, ‘Let me give it a try,’” Bellsey explained. “It was a really nice thing to focus on. I looked at the photo and the first thing that popped into my head was the 1950s song, ‘The Green Door.’ That was my inspiration. Finding a way to get the song into my painting became my challenge.”

Bellsey noted that she first tried to incorporate the lyrics into the painting but it didn’t work. “My solution was to overlay the lyrics on a clear sheet,” she said. “I like to use humor and even irony in my paintings. This was a fun song, probably about a honky tonk. I wrote the lyrics in a fine-tipped sharpie and added rhinestones to dot the i’s. The basic painting was done in acrylics. They dry fast and are easy to paint over if you want to change something,” she added.

Contest Judge Laurie Brussel commented that the entry was “tremendously creative, well thought out, with good composition,” adding that the entrant used a lot of ingenuity.

Bellsey said she’s been drawing all her life, ever since she could hold a crayon in her hand.

“I end up drawing most days, feet up on the sofa. An idea pops into my head and I have to draw it. I haven’t yet committed to a permanent studio space, but I can draw anywhere.”

While she majored in art history in college, Bellsey continued to pursue art and take classes everywhere she lived.

“I’ve taken classes in most every medium and tried it all—from stained glass and sculpture to painting and encaustics. I still love drawing—working in pencil, charcoal and pastels—and look forward to Saturday drawing group to resume in SaddleBrooke,” she said. “The Guild offers something for everyone, no matter your level. It’s got a full spectrum of activities.”

Even though she’s not taking a class right now, Bellsey’s been trying her hand at other creative endeavors during the pandemic. In addition to the Guild contest, she painted a mural on a pillar in her dining room.

“I’ve also been exploring book folding,” she said. “I found it on the internet,” explaining that it’s a sculptural way of folding book pages into an interesting three-dimensional design.

Visit their website at www.Saddlebrookefinearts.org for more about the Guild. Guild member works are displayed in the Road Runner gallery in the SaddleBrooke One clubhouse and SaddleBrooke One’s Activity Center.