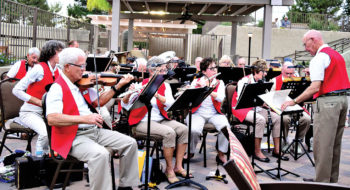 SaddleBrooke Winds & Strings started in the gloom of a cloudy sky with a promise of a storm but it did not deter us. Group set up was completed and we started to play.

For the first time Eddie, our new photographer, drifted in and out of Winds & Strings taking photos. This was a first for us and it did take a bit of getting used to. He was unobtrusive however and some great shots were taken.

Winds & Strings started with Cabaret from the Broadway Song Book and went into Copa. As we were playing Salute the Duke the rain began. A couple of big drops at first but very quickly it was really raining.

With the assistance of the Roadrunner Grill staff we were quickly ushered into the room where they were setting up the food for the gathering attendees to enjoy. Room was made for us; dry chairs were provided and music stands were dried off. Most importantly, we protected our instruments but the ones that got a bit wet were quickly attended to.

Group set up rows were now a bit different as we were in a tighter space but that was quickly adjusted to; soon Winds & Strings was playing music to the enjoyment of the whole crowd.

We started with Harlem Noctume then right into Hard Days Night and Eleanor Rigby by the Beatles. We played Jamaican Rhumba and Ghost, Wild Westerns and America, the Beautiful from the Patriotic Book. Winds & Strings concert concluded with Sousa Classics.

It was the opinion of several guests that the acoustics were better in the tighter space of the Roadrunner Grill. The walls projected our music forward instead of dissipating in the air of the outside area we first began in. (Just a note that the rain ended very quickly and there was no more rain to be had that evening.)

The Winds & Strings concert of music was topped off to a great round of applause, we all could tell we were appreciated