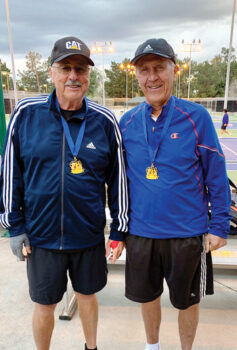 Did you know the Senior Olympic Festival is held every January in Tucson for a few weeks? There are many activities to participate in, ranging from racquet sports, bowling, horseshoes, bridge, archery, shuffleboard, and the list goes on!

For years, tennis players have competed at Reffkin Tennis Center in Tucson over three days and play doubles, mixed, and/or singles. Competition is grouped by USTA standards of Senior (50 to 59 years), Super Senior (60 to 69 years), and Ultra Senior (70-plus years).

Players participate in their age group, rather than their level of play. No rating or USTA membership is required. The format of matches is two out of three sets, with a 10-point tie break in lieu of the third set.

Years ago, there were often 50-plus tennis players just from SaddleBrooke who participated. Melanie Murphy has enjoyed this event since 1999. She and her husband, Ed, played in all the events, including MXD, winning several gold and silver medals. Melanie has also paired up with Kathy Jensen for the past 10 years, and they have also won silver and bronze medals.

This year, there were 32 events held at 24 locations across Tucson. The oldest woman was 95 years young who played shuffleboard! We had a few tennis players participating this year from SaddleBrooke. Congratulations to Jim Abrahamson and Gary Rowell who won the gold medal in Men’s Doubles 70+. Jim Abrahamson and Debbie McGeehan won the silver medal in MXD 65+. Melanie Murphy and Kathy Jensen won the bronze medal in the Women’s Doubles 70+.

It is a very fun event, and we are hoping more tennis players from SaddleBrooke will join in the fun next year! Our Tennis Club will be sure to advertise it prior to registration 2023.