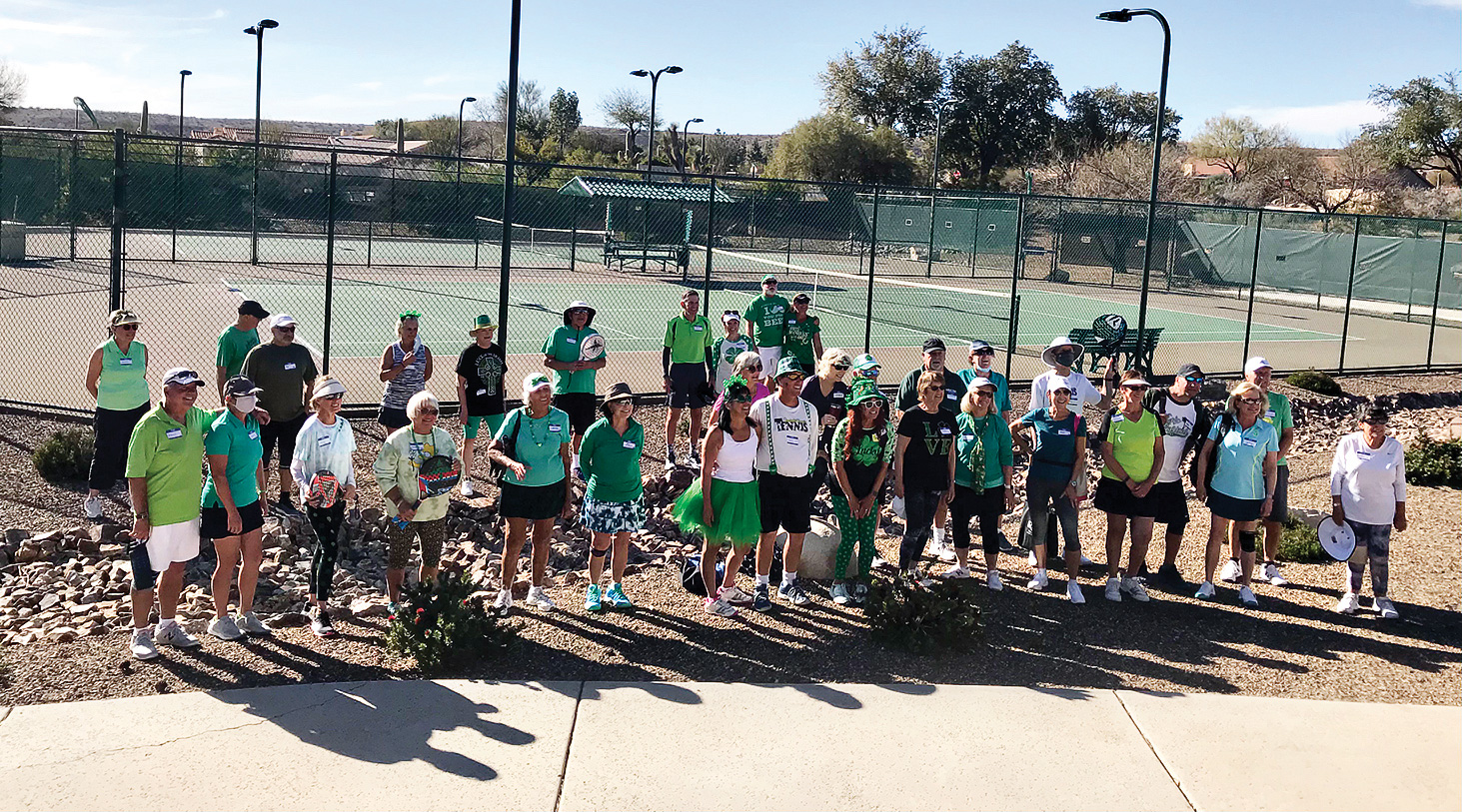 On March 17, when most people drank green beer and ate bangers and mash, 40 SaddleBrooke Tennis Club Poppers played in the St. Patrick’s Day Shuffle. With a mixture of men and women dressed in creative green attire and of various skill levels, the game of Pop Tennis is popping in SaddleBrooke.

After signing in, matches were set-up on eight courts. After 20 minutes of play, a cowbell clang, alerting players it was time to shuffle off to randomly selected courts for their next match. This play format continued for six rounds.

From the laughter, it was apparent that the Poppers were having a great time. Adding to the frivolity, Mike Dunbar’s music had players dancing and ‘shaking their green booties,’ all the while managing to hit the ball. Although it is fun to win, no one seemed to care about match outcomes. The intent was to meet people who shared the love of this United States Tennis Association’s (USTA) sanctioned sport. As with the USTA, Pop has added new members to SaddleBrooke’s Tennis Club.

While Pop Tennis has been around for over 100 years, it is new to SaddleBrooke, having appeared on the scene about two years ago. Since then, interest has exploded. Originally called Paddle Tennis, the name changed to Pop Tennis in 2015 due in part to the pop you hear when the paddle and ball collide and the game’s growing POP-ularity. It is played nationally on more than 30,000 courts. Equipment is a somewhat deflated tennis ball, a paddle (often called a racquet), and a court. Poppers who cannot stand to miss play when traveling find it easy to take Pop with them when on the road as a court will likely be near their destination. The mindset for many is ‘have paddle (or racquet) and ball, will travel.’

Play Pop Tennis, meet people, attend fun socials, and enjoy the benefits that come with membership in the SaddleBrooke Tennis Club. It sounds like a win-win!

How much does mental toughness really matter in the game of tennis? Some athletes say up to 80 percent. Eighty percent—wow.

It’s not unusual to see matches change in a matter of minutes, with the first set being lost 6-0 or 6-1 and then the momentum changes. We not only see this occur at the professional level but in the amateur realm also, on our very own courts. Often we start a match and say to one’s self that we are going to win this match but it doesn’t turn out as we envisioned.

Does anyone really know the answer? Obviously the skill levels are important, but that’s not mental toughness. Let’s go through some of what the professionals and amateurs have mentioned.

* Believe in yourself and your abilities.

* Praise yourself and your partner on every opportunity to raise confidence.

* Concentrate on every shot; often just to get the next shot back.

* Think positive and eliminate the fear of losing and enjoy the moment.

* Play like you practice, this will mentally help remove the fear of losing or disappointing your partner.

* Play aggressively but in control, pressuring your opponents, and raising your confidence.

* Play in the present and forget about the last bad shot or shots.

* Believe in your partner and praise him or her to raise their confidence.

* Practice your shots on a regular basis to lift your confidence for when it’s time to use them in the game.

* Practice up to raise your level of concentration.

Potential is always more than what we are presently doing. Work on that potential and believe you can play better today than you played yesterday.

Obviously, your physical skill set is important. You must have a basic set of skills to start and the best way to develop tennis skills is with lessons from a professional and the maturing of what you learn by hours of practice.

Many of the great professionals and amateur players fought through many of these barriers during their careers to achieve greatness. If we want to improve, we need to work on the same mental list and work on our skill set. Setting an objective of improving one or more of your skills increases confidence, and confidence is one of the keys to mental toughness.

Join us on the SaddleBrooke tennis courts and work on your mental toughness.