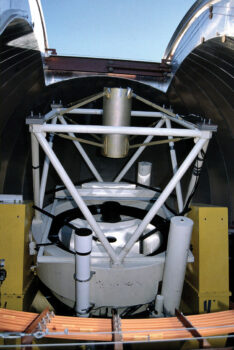 The SaddleBrooke Skygazers Astronomy Club is pleased to host Father Christopher Corbally, an astronomer with Tucson’s Vatican Observatory Research Group, on Sunday, March 8th at the SaddleBrooke One Activity Center at 7 p.m. Father Corbally will describe the church’s participation and contributions to the science of astronomy and his interest in stellar spectroscopy.

Christopher Corbally is a Jesuit priest serving as Vice Director and liaison to the Vatican’s Observatory headquarters at Castel Gandolfo, Italy. He is an Adjunct Associate Astronomer in the Department of Astronomy at University of Arizona. He ministers to a wide variety of people, including Native Americans. He earned his doctorate in astronomy at the University of Toronto in 1983; his research interests included stellar spectral classification, multiple star systems, peculiar stars, activity in solar-type stars, star formation regions in the Milky Way, and telescope technology. Father Corbally’s interest in issues of science and religion is long-standing. He is a past-president of IRAS, the Institute on Religion in an Age of Science, and co-founder with Dr. Margaret Boone Rappaport of The Human Sentience Project. Together they have a recent book, The Emergence of Religion in Human Evolution, as well as write on humans in space exploration and colonization.

The SaddleBrooke Skygazers Astronomy Club meets monthly on the second Sunday evening (7 p.m.) at the SaddleBrooke One Activity Center. Star parties are held monthly at the softball field parking lot. The next star party is on Thursday, March 19 at 7:15 p.m. The public is welcome to both. Club and star party information can be obtained by emailing Sam Miller at [email protected]