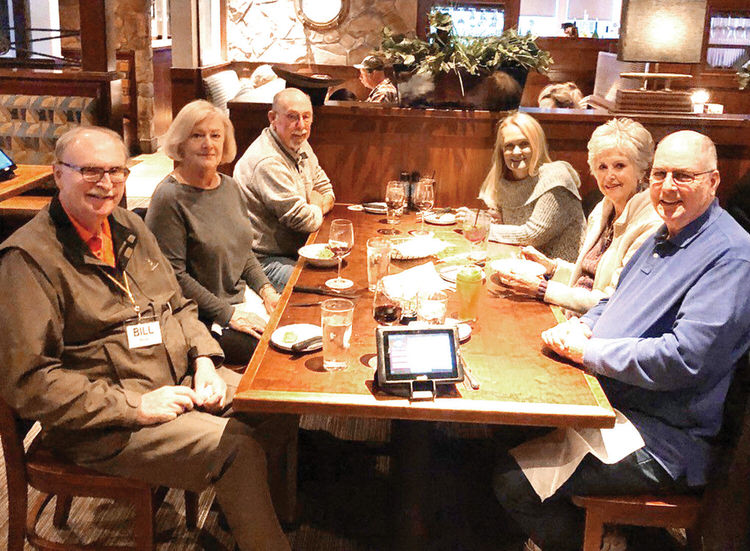 The SaddleBrooke Singles Club offers a low-key environment for socializing with others who are similarly situated. In addition to our very popular weekly happy hour in which we meet in one of the SaddleBrooke clubhouses for drinks and dinner, members hold events in their homes (one hosted 16 for Thanksgiving dinner, and another hosted a Christmas Party for 25), our club has dine-arounds in restaurants, has hiked together, attends concerts, visits places of interest in the area, and hears speakers discussing topics relevant to our demographic, such as how to preserve financial security—a timely subject given the challenge current inflation rates pose to retirees. Members are encouraged to offer suggestions as to other activities we might participate in as a group. One relatively new member suggested having others over to enjoy his newly installed putting green and some wine. The idea for a putting and Pinot party was met with enthusiasm and scheduled for the beginning of April. We are planning a day trip to the Pima Air and Space Museum later that month. Several other activities that had been put on hold due to the Omicron surge were back on the horizon in the hopes that they could be held between variants.

Although other organizations canceled events due to bad weather (snow, poor visibility, and ice, reminding us of the states we fled), 16 hearty souls from the Singles Club attended a dine-around at Red Lobster in the Oro Valley Marketplace. The rumors that this restaurant was closing turned out to be unfounded, and we rejoiced that we would not have to drive 20 miles for seafood and cheddar biscuits. Two days later, a unique element was added to our weekly happy hour. The milestone birthday of a member with the longest tenure in Singles (our “institutional memory”) was celebrated with a chocolate mousse cake from AJ’s. This was intended as a surprise, but when the honoree mentioned his reluctance to attend happy hour to his friend, the latter spilled the beans that he was to be feted and could not bow out. Surprise or not, the cake was a huge success and reminded us all that the Singles Club can make us feel like we are surrounded by family, even when our loved ones are far away.

If you are single in SaddleBrooke and would like to meet other fun and vibrant people, please join us at our weekly happy hour on Fridays at 4 p.m. During odd months (January, March, May, July, September, and November), we meet for drinks and dinner at the SaddleBrooke One clubhouse, and during the even months (February, April, June, August, October, and December), at SaddleBrooke TWO in the MountainView Clubhouse. Some members also attend happy hour at the Preserve (on the patio during the warmer weather and inside when it is colder). As all clubhouses have been subject to temporary closings and/or prior bookings, so check first before attending. For more information, contact Hazel Staloff at [email protected]