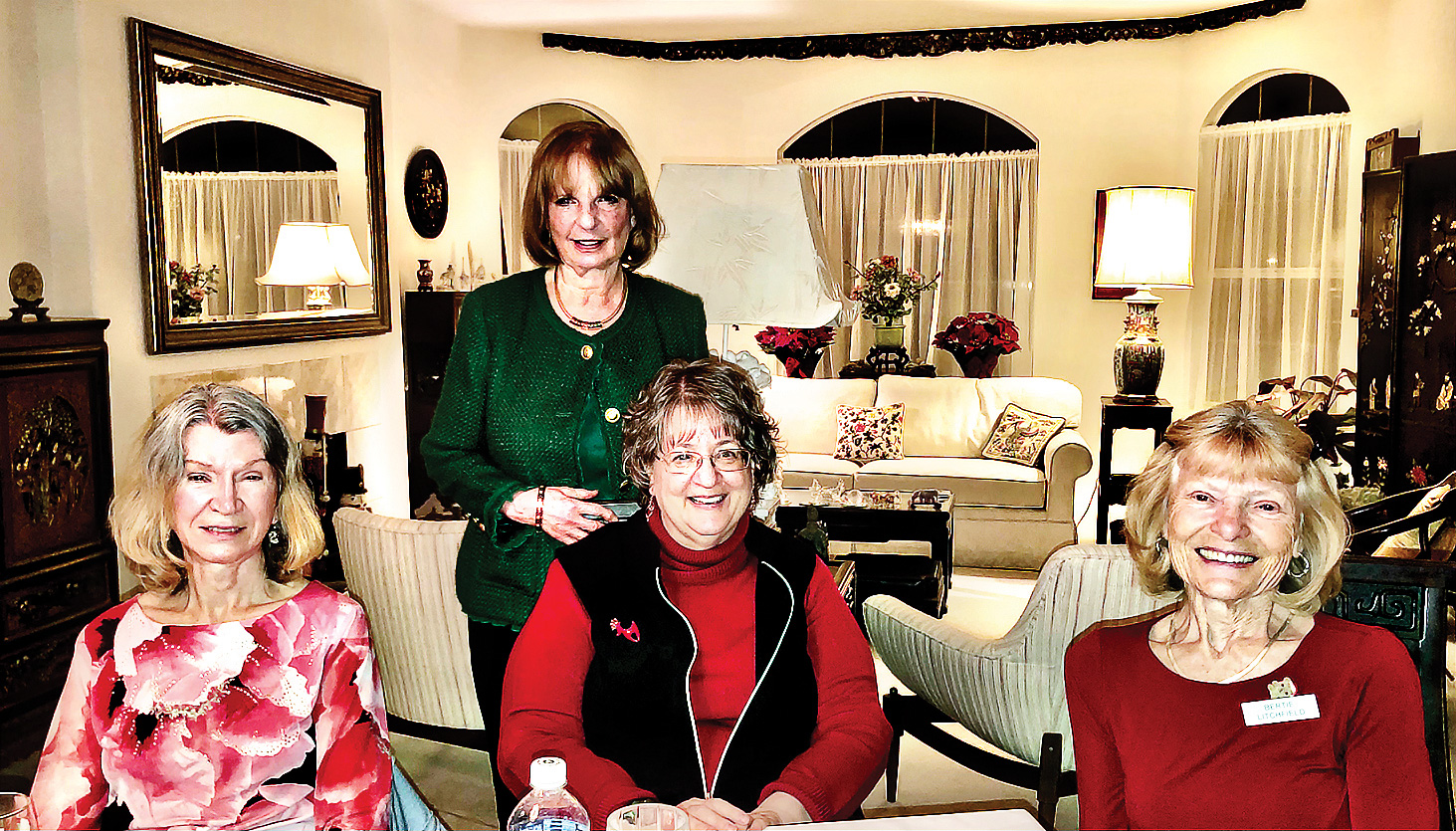 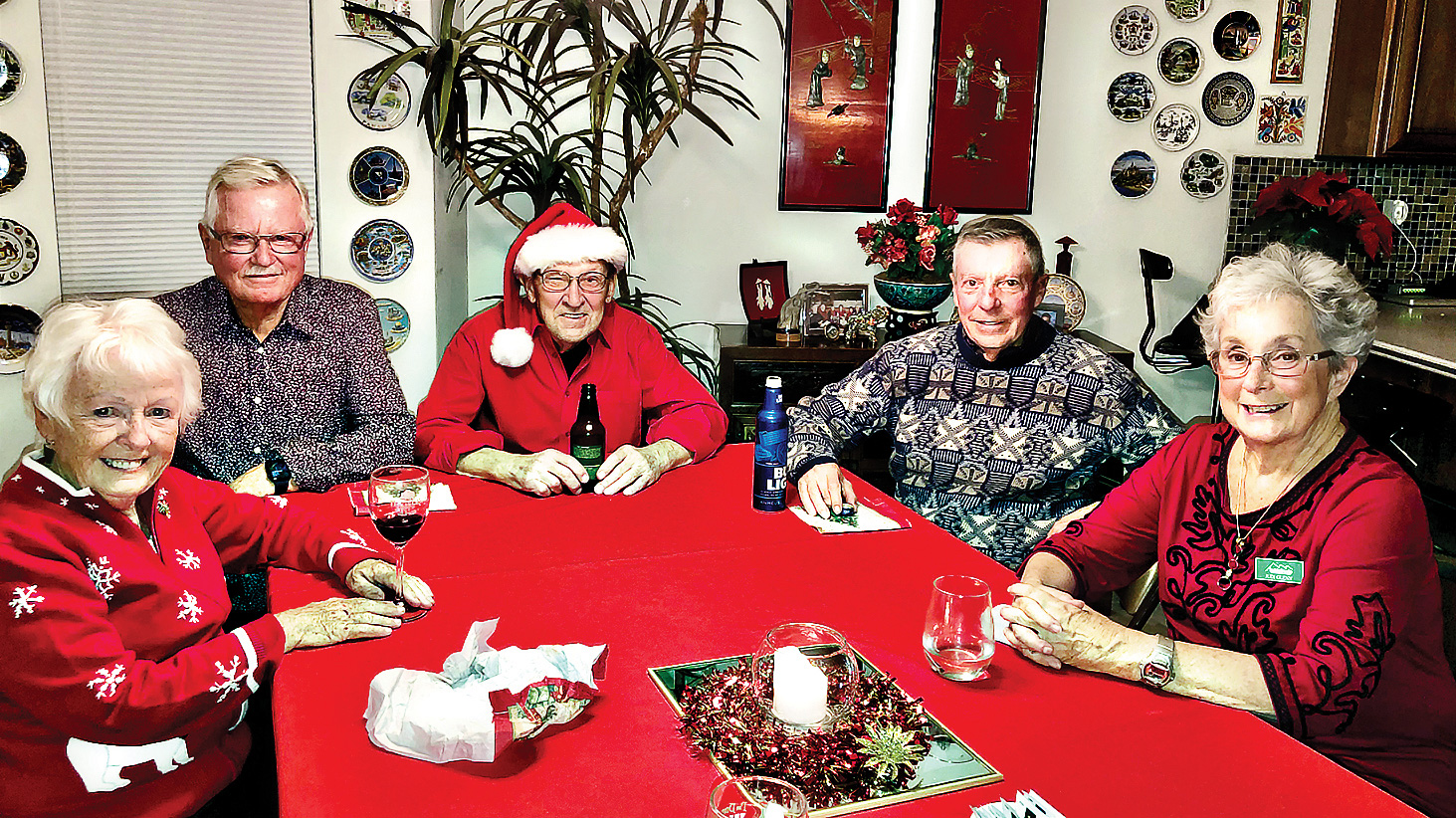 Although we customarily have our holiday bash at the SaddleBrooke One Clubhouse, 2020 put a kibosh on that. Not about to give up a chance to get together, a member volunteered to host the party at her home on Dec. 12. Fifteen members attended, all of whom passed the entrance test—a temperature check at the door. We were able to fund the party through our Treasury (Singles Club membership is a bargain at $5 annually), and enjoyed a hearty dinner of salad, garlic bread, two kinds of lasagna, many desserts (tiramisu, homemade pecan pie, and cookies). Our hostess provided after-dinner liquors as well. One was berry flavored, although the label was in Cyrillic so no one could identify the flavor with certainty; creme de menthe was another (fun fact: white creme de menthe was a favored libation of notorious Hollywood talent agent Henry Willson, the discoverer of Rock Hudson).

After dinner, we participated in a white elephant gift exchange. Some gifts resulted in stealing—a member contributed a blender because he had a duplicate; a bottle of wine was met with delight until the recipient learned that it was non-alcoholic. But that too was stolen, by a teetotaler.

When asked what they hoped for in the new year, all expressed a wistful longing for the old normal, e.g., social activities, travel, not having to wear a mask. A male newcomer was anxious to experience the lifestyle that inspired him to move to SaddleBrooke. “Everything stopped seven days after I arrived,” he said. One guest was particularly looking forward to a return to trivia night at SaddleBrooke One, an event so popular that seating is no longer available within three hours of the event’s start. One woman had five trips planned, four on boats. Another woman described an anticipated benefit of her trip booked on the Cunard line: male dance hosts who are required to ensure that single female passengers have dance partners. When another guest warned that these men might be up to no good (attractive young men who prey on wealthy widows aboard ships is a standard crime drama plot), the woman responded that she was a farm girl and could take care of herself. A guest expressed his desire to be able to travel to Costa Rica and take a tour of the Canadian Rockies aboard the Rocky Mountaineer. Several mentioned travel in the context of being able to see their families again.

Many were optimistic about the vaccine. “I look forward to no longer having a fear of getting ill or making someone else ill,” one guest described. One guest reflected on the difficult year his 14-year-old dog has had. “Dog needs a break as do we all,” they said.

SaddleBrooke Singles meet weekly for happy hour, Fridays at 4 p.m., at the Agave Lounge at SaddleBrooke One, and during the warmer months at the Preserve (due to prior bookings, check first before attending). We also have many other events scheduled throughout the year. For more information, contact David Dodd at [email protected]