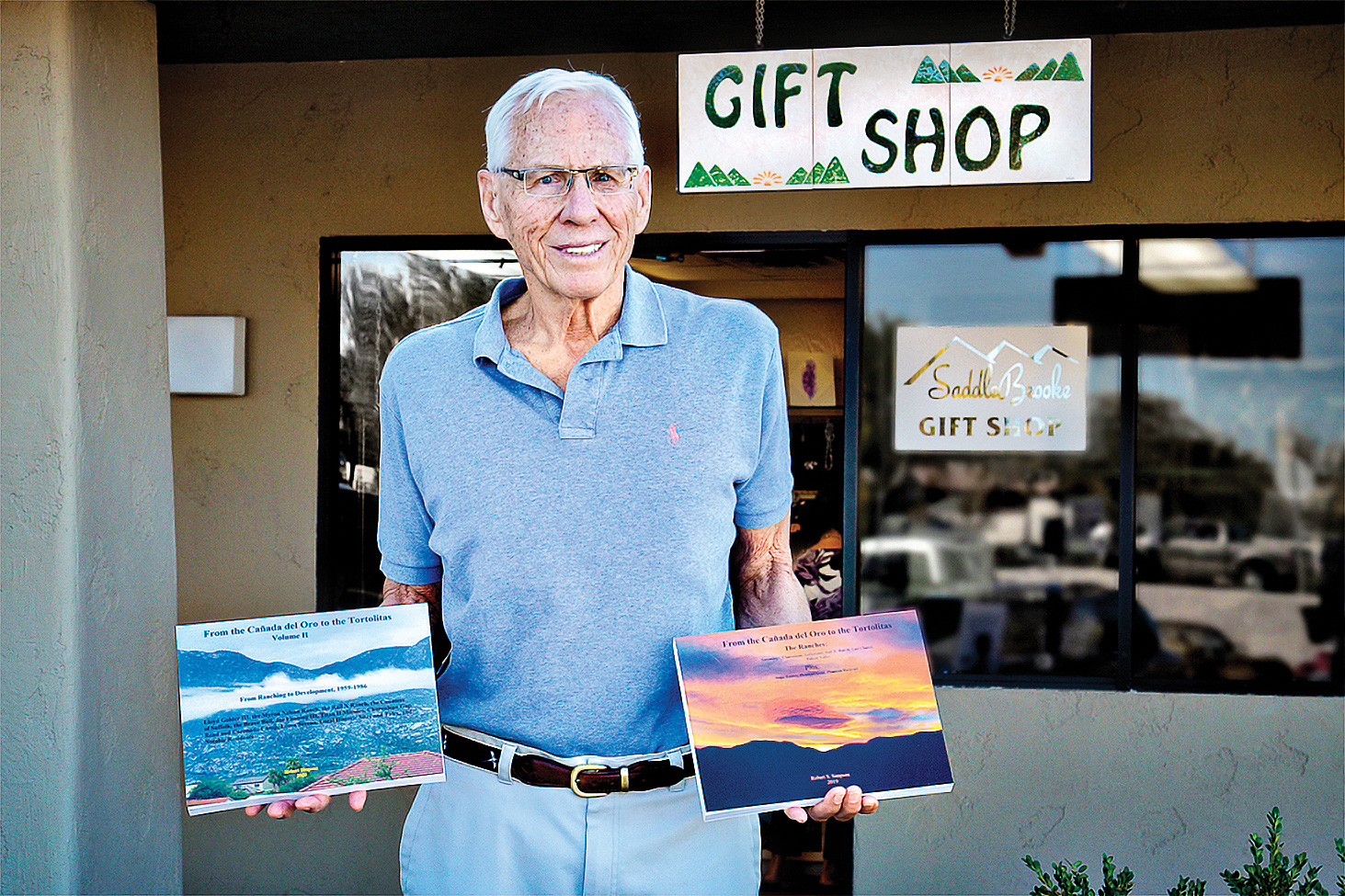 Bob presenting both volumes of his book.

Robert “Bob” Simpson is an author and local historian. Born and raised in Fullerton, Calif., he attended UCLA, UC Davis, and received his Masters in Agricultural Economics from Oregon State University. Bob then taught Business Administration at the University of Maryland and later entered the Doctoral Program at Harvard Business School. In Boston, he met and married Jean Wesley. After leaving Harvard in 1966, Bob was commissioned into the Foreign Service of the U.S. by President Lyndon Johnson. The first assignment for Bob and Jean was the American Embassy in Tokyo and their next tour was the American Embassy in Antananarivo, Madagascar.

In 2002, the Simpsons bought a house in SaddleBrooke. Bob wanted to retire in the southwest. “When I first crested SaddleBrooke Hill and looked down at the beautiful valley below the mountains, I glimpsed the future,” he said. Sadly, his wife Jean passed away the following year. Later Bob met Jan Mattson and they have been enjoying life in SaddleBrooke for more than 15 years. They like visiting beaches in Bob’s native California, European cycling vacations, and a variety of activities in the community.

Bob began writing in his retirement. His curiosity about SaddleBrooke and the surrounding area led to researching online Arizona newspaper archives, U.S. Census records, homestead patents, and much more. Among his early discoveries were who established Deer Camp, who owned the cattle grazing around SaddleBrooke, and for whom Charouleau Gap was named.

The Arizona Daily Star described Bob’s first book, From the Cañada del Oro to the Tortolitas as a “deep dive into the history of SaddleBrooke area ranches.” In his research Bob tries to delve below the surface, uncover the most interesting facts, and document them thoroughly. He also includes many maps, photos and other graphics. He especially looks for unexpected stories like SaddleBrooke’s Phantom Gold. Two favorite things about his craft have been making friends with current descendants of historical figures and receiving the gratitude of longtime local residents who learn things they had not known.

In 2019, Bob joined with the gift shop to market his first book. In 2020, his second volume became available and includes the history of Golder Lake and Golder Dam. He enjoys meeting friendly, enthusiastic neighbors in the shop and in summer when business is slow taking an “occasional nap!” His words of wisdom to others, “Be kind. Seek truth. Appreciate this beautiful place where 100 years ago only cattle grazed.”

Bob’s book is only one of the many items available in the SaddleBrooke gift shop. We are located in SaddleBrooke One near the clubhouse and next door to the Fitness Center and are currently open from 9 a.m. until 4 p.m. Monday through Saturday.