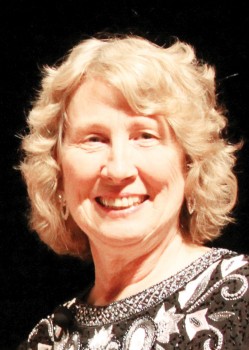 Linda Griffin will conduct her last season as Director of the SaddleBrooke Singers; photo taken by Jim Van Brocklin.

After ten years as our director, Linda Griffin has, for professional and personal reasons, tendered her resignation. In her letter of resignation Linda says, “My time with the Singers has been very rewarding and I count each person as my friend. For ten years I have tried to move the Singers in new and challenging directions; I think we have all succeeded.” The SaddleBrooke Singers certainly agree with her that she has elevated the quality of the music presented and of the chorus itself. We will miss her leadership and we accept her resignation with regret. She will be staying with us as our director through the December concert and plans to return as a singer after a year’s hiatus.

Under the leadership of the organization’s Board of Directors, a search is underway to select a new Director. We will be accepting applications from both within and out of the SaddleBrooke Community. While the choir is made up of volunteer members, the position of Director is a paid position and our goal is to obtain the best possible director available. We will be accepting applications until September and then begin an interview process which will include the finalists guest-directing a rehearsal. The selected Director will begin formal service in January 2016.

The SaddleBrooke Singers rehearse Sunday afternoons from 4:00 to 6:00 p.m. in SaddleBrooke at the HOA 1 Activity Center. They present two major concerts (two performances each), one in April and one in December. Programs will typically have around twenty musical numbers plus audience sing-alongs. They do not rehearse from after the April concert to the first week in September.

The Director’s responsibilities include planning the concert programs and directing the group for fourteen rehearsals and two concert performances each season.

The SaddleBrooke Singers have been an organized group in SaddleBrooke for over twenty years. They started out small but have grown through the years to where their roster includes the names of over 70 singers, with some 55 to 65 singing at each concert. Over the years they have accumulated an impressive musical library consisting of 250 titles and over 14,000 individual sheets of music. They are a nonprofit organization supported by members’ dues, sponsors and proceeds from concerts. They are led by the Musical Director and an elected Board of Directors.