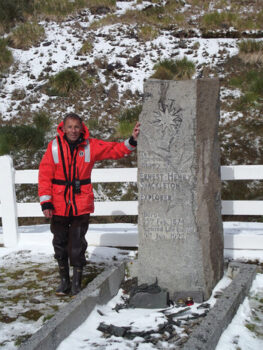 Joseph Rizza, M.D., SaddleBrooke resident and specialist in internal medicine and emergency medicine, has been a cruise ship doctor for 30 years. Many of his cruises have been on expedition ships and icebreakers to Antarctica, South Georgia, and the high Arctic, including the North Pole. He has typically accompanied from 50 to 180 passengers to remote and hostile locations. He has visited the grave of Sir Ernest Shackleton about 10 times. The famous Antarctic explorer Shackelton rests in a small and austere cemetery on the island of South Georgia, which lies in the deep South Atlantic roughly 700 miles northeast of the Antarctic Peninsula. Dr. Rizza, as part of the expedition team, will usually lead a group of passengers, who consider themselves fit enough for the four- to five-mile hike, over a mountain pass to the old Norwegian whaling station of Grytviken to pay homage to Shackelton (“The Boss”) with a bottle or two of Irish whiskey.