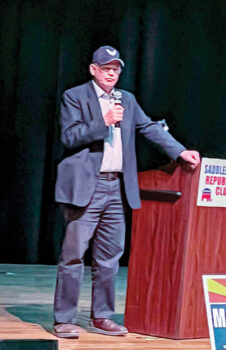 At its March 8 DesertView Theater meeting, the SaddleBrooke Republican Club hosted candidates for U.S. Congress, Arizona Senate, Arizona Governor, and Arizona Attorney General. After President Dan Culver announced that the club bylaws had been revised and submitted to the membership for approval, Program Chair Barbara Treick introduced the speakers.

Young Mayberry is a retired U.S. Air Force officer and now a rancher running for the U.S. House of Representatives in the newly created District 6. He believes that the country is on the wrong track and needs new leadership in Congress. He is committed to reducing out-of-control federal spending and securing our southern border.

Justine Wadsack is a housewife running for the State Senate in District 17. She is running because she is concerned about the schooling of children in Arizona and feels the Teachers Union has diminished the quality of education. She is a firm supporter of the Constitution for all.

Paola Tulliani Zen is a businesswoman running for governor of Arizona. She is an Italian immigrant who has managed several successful businesses and would bring that expertise to the management of the Arizona government.

Judge Andrew Gould is a candidate for Arizona Attorney General. He has given up a coveted seat on the Arizona Supreme Court to run for Attorney General because he feels strongly about the need to enforce Arizona’s existing laws and correct problems at our southern border. Citing his experience as a prosecuting attorney in Yuma, where he saw the border problems first hand, Judge Gould gave an impassioned speech about the need to control illegal immigration, human and drug trafficking, that drew a standing ovation from the audience.

At its next meeting on April 12 in the DesertView Theater, the SaddleBrooke Republican Club will be hosting candidates Kimberly Yee, State Treasurer; Michelle Ugenti-Rita, Secretary of State; Kathleen Winn, U.S. Congress; and Mark Brnovich, U.S. Senate. All interested residents are invited to attend.