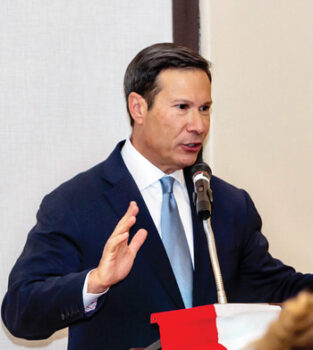 Three hundred enthusiastic Democrats gathered in the MountainView Ballroom on March 1 for their annual celebration, which had been postponed from its original Jan. 31 date because of the recent COVID spike.

After hearing remarks from each special guest, Mr. Figliuzzi addressed the group with an inspiring account of how any organization can achieve individual and corporate excellence. He referred to the field-tested playbook the FBI uses for unlocking individual and organizational excellence. Drawing from his book, The FBI Way, and interspersing stories from his own career, he emphasized that training and following core values clarifies an organization’s meaning and purpose and sets expectations for everyone in its service. This preserves the organization’s values against all threats, internal and external. Individuals, companies, schools, teams, or any group seeking excellence will be well served if they establish and adhere to clear core values.

Mr. Figliuzzi also noted that the most pressing anti-terrorism issues today are not foreign, but rather domestic. The rise of groups willing to violently overthrow our democracy presents a problem that needs to be recognized by all Americans. He stated that after failing to change the government through the January 6 insurrection, these groups are now focusing more locally to get control of school boards, sheriffs, and legislators, and emphasized that this is a critical danger for the ongoing well-being of our country.

After a period of questions and answers, the group disbanded to reflect and enjoy one another’s company. We thank Mr. Figliuzzi, our special guests, and the MountainView staff for a wholly enjoyable and informative evening.