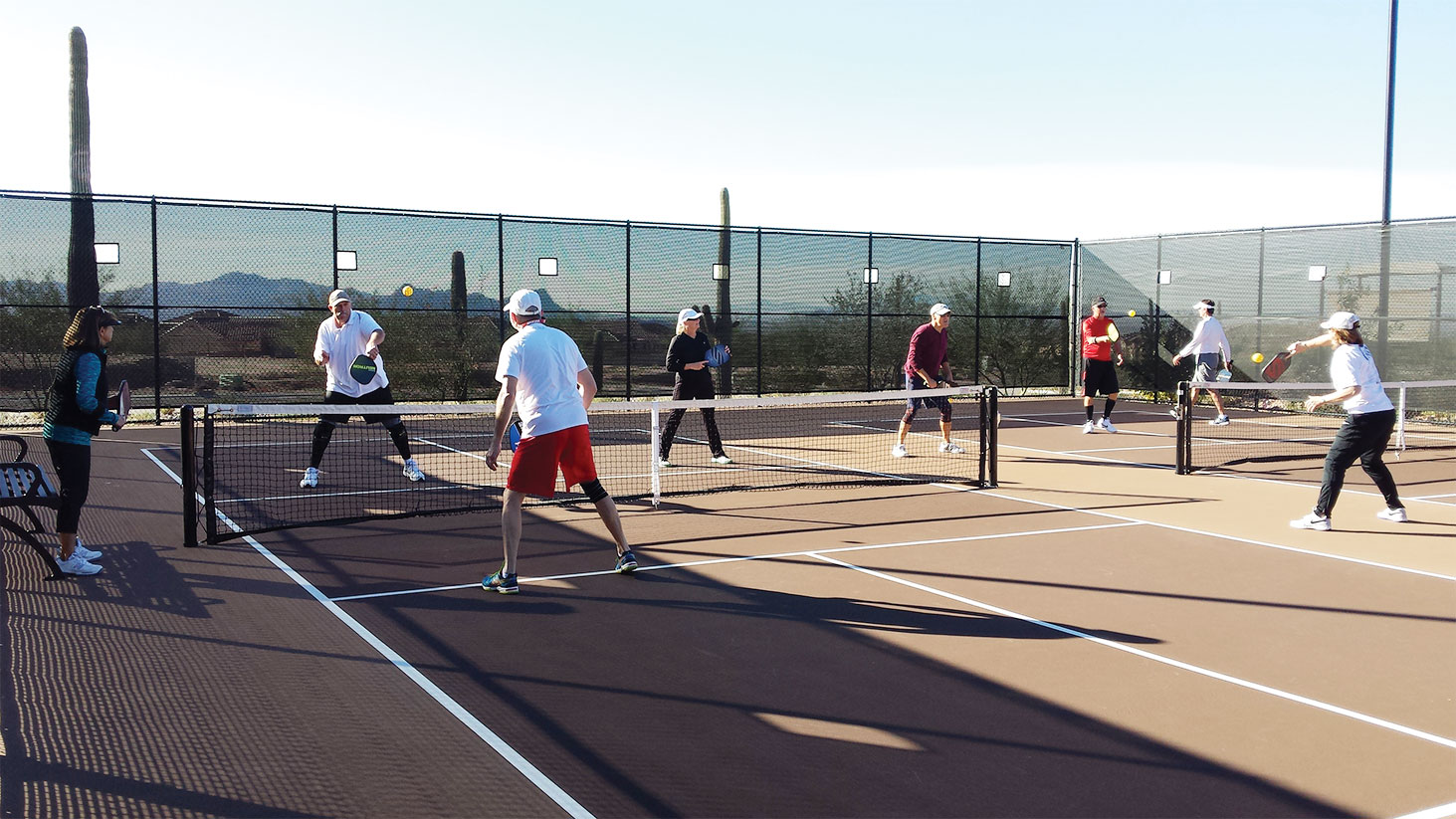 The Del Webb Dove Mountain Pickleball players asked SaddleBrooke Pickleball Club for help with their playing abilities. This past January Pete and Diana Giljohann and Peggy Cobb met with the 18 intermediate players at the four courts. Pete and Diana put on a clinic to help them enhance their Pickleball game. They provided us with homemade snacks and wonderful hospitality. The Giljohann’s clinic ended with several high-spirited games.

This section of the extensive Dove Mountain neighborhoods is three years old, one-third complete with 250 houses built. Several of these neighborhoods have from four to six Pickleball courts included in their recreational areas.

Pickleball players are inclusive and love to promote the sport to all groups and skill levels. Pete and Diana are perfect ambassadors for the sport anywhere they play and have been playing and giving Pickleball clinics for the last 11 years. They vacation throughout the country with their pickleball gear, and they look to play pickleball with the locals wherever they are.

I tagged along to Dove Mountain with Pete and Diana because I received the call from their club president asking if I knew of anyone local who could help several mid-level players improve their game. I am the USAPA (United States of America Pickleball Association) Ambassador for the Oro Valley/Tucson area and have been a player for seven years and an Ambassador for six years, starting in Oklahoma City where all pickleball play is indoor in mostly gyms. At the time my husband, George, and I started playing, the Oklahoma City club had about 25 members and two locations to play. One of those locations had only one court. It was a slippery floor tile on which we set up portable nets and laid tape down for the lines.

George and I discovered this great sport one April when I was signing up for different events in the Yukon Senior Games. For a moment I was at a loss for an additional event because Bocce ball wasn’t being offered that year. I thought Bocce ball would even out the playing field for me since I was a younger senior; whereas the previous year I was beat handily at Wii Bowling by 90+ year young ladies in wheelchairs! At the sign-up desk I asked what pickleball is and since nobody knew, I thought I had a chance for an easy medal. Little did I know…the day of the big event I asked my first (and only) female opponent if I could borrow a paddle from her. I don’t remember making a point in those two games to 11 points, but the sport caught the attention of George, who was sympathetically cheering me on from the bleachers. He asked if she would teach him how to play pickleball and we both started playing the next week.

Since the majority of players are seniors, we are able to travel around the country playing pickleball, just like Pete and Diana. A wonderful group of players who become life-long friends and each other’s cheering squad. It’s easy to find where pickleball is being played by checking the website “Places 2 Play,” which currently lists 195 courts in Arizona!

Many SPA members travel elsewhere in the summer, including Kevin Tharp who this past summer started pickleball lessons in Cloudcroft, NM, a summer community in the Lincoln National Forest and Sacramento Mountains. He had great attendance for his inaugural sessions with about 25 people each session!